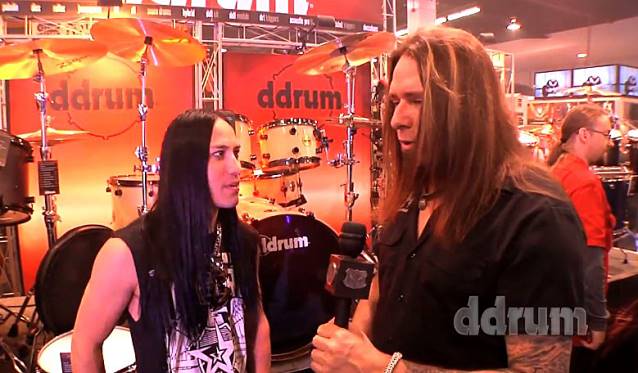 ddrum conducted an interview with Tim Yeung of MORBID ANGEL at this year's NAMM (National Association Of Music Merchants) show, which was held January 23-26 at the Anaheim Convention Center in Anaheim, California. You can now watch the chat below.

In a recent interview with Invisible Oranges, MORBID ANGEL bassist/vocalist David Vincent stated about how it felt performing the band's entire 1993 album, "Covenant", with Yeung on the group's recent North American tour: "Tim's an excellent drummer. He handles the material very well. He was a big fan of the record when it came out, too. He's a couple years my junior, but it's cool. He feels the songs really well, and it's fun."

Asked how it's been playing with MORBID ANGEL three years after he replaced the band's longtime drummer, Pedro "Pete" Sandoval, so that Pete could recover from surgery for a disc prolapse, Yeung told Monster: "It's been great. MORBID ANGEL has been awesome as far as we work great together. I fit really good with those guys. We're all a little crazy, so I fit in perfectly with that. It's great. It's awesome. It's an honor to work with them. It's fantastic. The fans are really starting to come through also. It was a little hard at first, because Pete's such a great player; he's really irreplaceable. So I really just kind of filled that slot. I didn't really replace him — I just added my own… They just added me to the element there, what was there. So it's been awesome; really great."

Now based in Los Angeles, Yeung has performed and worked with such national acts as ALL THAT REMAINS, HANK WILLIAMS III, NILE, VITAL REMAINS and DECREPIT BIRTH. His straddling of the extreme and mainstream is perhaps best reflected in his work with his band DIVINE HERESY, whose music features elements of extreme death metal as well as more mainstream genres.

"Vengeance Is Mine" drum-cam footage: