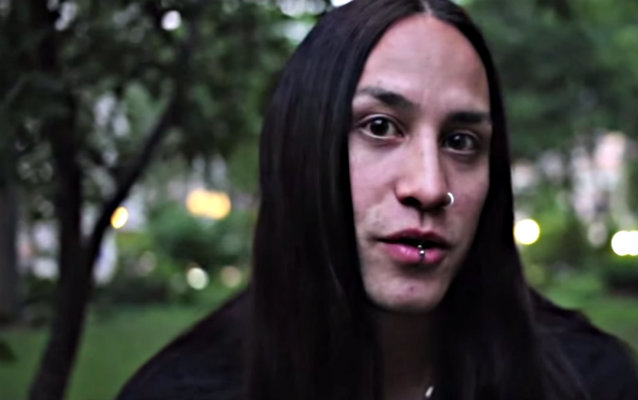 On August 8, Metal Mark of SkullsNBones.com conducted an interview with drummer Tim Yeung of death metal veterans MORBID ANGEL. You can now watch the chat below.

Asked when fans can expect to see a follow-up to MORBID ANGEL's 2011 album "Illud Divinum Insanus", Yeung replied: "I don't know. I don't have that answer. I would love to do [a new album] — I'm ready right now — but it's really up to other people to start getting some stuff together. I think there are some songs that are kind of in the works right now. I know there's riffs and stuff like that — I hear stuff here and there — but we aren't actually working on anything yet. But we are working on getting… We're talking about doing maybe an EP, something of that nature. I think that could be a possibility. [We'll] try to shoot for next year. Or 2016, I don't know… Hopefully it's soon. Hopefully next year. So there is talks of it. But nothing confirmed."

"Illud Divinum Insanus" sold around 3,600 copies in the United States in its first week of release to enter The Billboard 200 chart at position No. 141. The effort marked MORBID ANGEL's first CD to feature bassist/vocalist David Vincent since 1995's "Domination".

Regarding the mixed fan reactions to "Illud Divinum Insanus", Vincent told AndrewHaug.com back in April: "It's pretty interesting, looking back over a year later now, and a number of people said, 'You know, I've listened to it a little more,' and because it wasn't what they absolutely expected… Which is another very good reason to do something, to keep the artistic integrity as pure as possible. But MORBID ANGEL has always been a band that been all-encompassing. And when people, sort of, think that they know what we should sound like… I don't think anybody knows what we should sound like more than we do. It's not like it's that big a departure, because on the 'Covenant' record, we did some collaborations with the Slovenian band LAIBACH for that record. So it's not like it's a big change for us to work with some electronic artists and to do some interesting things, in and amongst everything else that we do. So I'm pleased that people have come around to it."

He continued: "We've had interesting comments, really, throughout our career, with each record. After putting out 'Altars Of Madness', then when we went to 'Blessed Are The Sick', people were, like, 'Oh, wow, this is different.' Well, of course it is. And then 'Covenant' was different from that. So these are things that we expect and we continue to do what we do. A lot of people are grateful that we've done what we've done throughout the years.

He added: "This is what we've always done. We don't look outward for inspiration, we look inward. So writing to the wayward and short-attention-span tastes of some listeners is something that we've never even considered doing.

"When I listen to bands and I hear stuff that I like or stuff that I don't like, because I'm, obviously, a music fan myself, I look at the portfolio of stuff and a lot of times I might hear something and maybe it doesn't hit me the first time, but maybe upon subsequent listens, I finally understand it and I get it and I enjoy it. So this is how it works with art. I walk through museums and I don't like every painting necessarily — I wouldn't put them on my wall — but I appreciate them in the whole stroke of the visual journey."