"Covenant", the classic album from Floridian death metal legends MORBID ANGEL, is due to be reissued in Europe on limited edition Full Dynamic Range vinyl LP to celebrate the 20th anniversary of the LP's release.

Originally issued in 1993, "Covenant" is the band's third album and has been specially remastered from the original tapes in Full Dynamic Range (FDR) audio, allowing the music's nuances to shine through and giving the album a more ferocious, immersive and dynamic sound than ever before.

"We are all excited to revisit this album in celebration of its 20th anniversary, both on stage and on wax.

"For purists and vinyl aficionados alike, this new full dynamic master pressing is sure to illuminate the analog sonic fury that we captured in 1993."

The vinyl will be available in the following quantities and colours:

The "Covenant" Full Dynamic Range vinyl is due to be released on November 4 through the Earache European webstore, and will also be available in limited quantities directly from the band on the band's "Covenant" 20th-anniversary U.S. tour.

The vinyl will be available for pre-order on Friday, October 18 from the Earache webstore at this location.

The Full Dynamic Range edition of "Covenant" will also be released in Europe on iTunes on November 4. 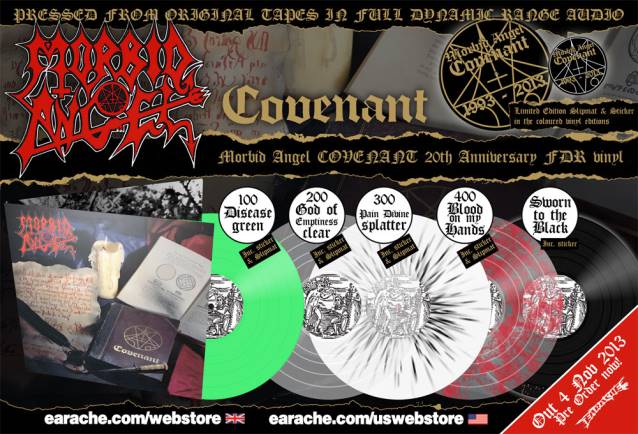