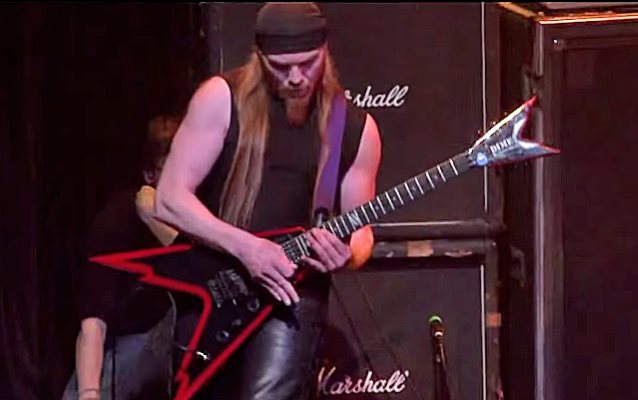 Norwegian guitarist Destructhor (pictured; a.k.a. Thor Anders Myhren) has officially left MORBID ANGEL. He says in a statement: "I would like to announce that I, Destructhor, as well am out of MORBID ANGEL. Due to issues of them wanting to work with someone more local. Actually pretty good news to me, since I personally decided to leave MORBID ANGEL after the last tour we did in Europe in November/December 2014. It is definitely time for me to move on with the Norwegian extreme act MYRKSKOG. This is where I truly belong and exciting things are happening! A new record is being released next year with coming tours, festivals and so on. So it's time to step it up and prepare for war with my Norwegian/Swedish brothers in MYRKSKOG."

He adds: "As for MORBID ANGEL, I wish them all the best with everything! It's been a lot of great experiences! No hard feelings at all and may the future bring us all to another dimension!"

As previously reported, MORBID ANGEL guitarist Trey Azagthoth announced on June 15 that the band had reunited with Steve Tucker and that they were working on material for MORBID ANGEL's next record. Later that same day, David Vincent, who rejoined MORBID ANGEL in 2004 after first parting ways with the band in 1996, issued a statement of his own claiming that he had not left the band and had not been asked to do so. Also on June 15, drummer Tim Yeung confirmed his exit from MORBID ANGEL, explaining in a statement: "There have been some lineup changes with MORBID ANGEL. Unfortunately, due to financial differences, I will not be continuing with [the band]… I wish Trey and MORBID ANGEL all the best. As for myself, I'm always up for the next opportunity life throws my way."