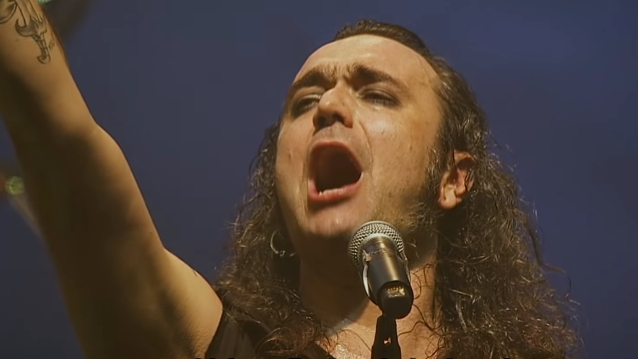 MOONSPELL frontman Fernando Ribeiro has fired back at some of the group's followers after he and his bandmates were criticized over their new social media policy.

Earlier today, the official MOONSPELL social media channels were updated with the following message: "NOTICE: dear all, we have been unfollowing loads of profiles that for some reason didn't follow us back. Thanks for understanding, have a kickass 2020 Under the spell"

After some fans mistook the missive as having been directed at them, Ribeiro took to social media to clarify MOONSPELL' stance and to decry the "toxic" nature of social networking platforms.

"I got a worried call from our social networking team and decided to check it out for myself and drop you some words.

"The unfollow policy is a part of a new take of MOONSPELL relationship with socials. It was meant for 'fellow' bands, artists, designers, acquaintances, agents etc. who do not extend the COURTESY of a follow back to MOONSPELL as a gesture and also an appreciation of our job by keeping up-to-date with it. It wasn't meant for any fans but people upset about everything and everyone's a victim these days. That's why I don't own either a FB or Instagram personal profile of my own. So the words I read here just underline that simple fact that socials are toxic and that the 'fans' want them to stay like that. I am a fan of many bands and if they posted anything like this, I wouldn't DARE to say to a band to grow up or call them the things I read here about my band.

"I am appalled that such a simple post and a rightful intention is heavily denounced and criticised under these terms. If you want to unfollow MOONSPELL, please be our guest. We are not interested in your cats, dogs or sunset pics at the beach. Music is what matters for us. All the rest, we couldn't give a fuck to be honest. So people who are so offended -many commenting here for the very first time ever- don't let the door hit your as. Do think, if you want, who really needs to grow up. Give two shits about what's music really like and stop being so involved in a stupid campaign for being right and tellings 'bands' a lesson. Send love, keep your hate to yourself and look around to find out that for a fact there are little band profiles where bands follow or care fans as much as we do.

"We do hope our posts about our new website, my literary blog and brand, and of course the new album will arise so much interest as this one, which I very much doubt, but stay tuned.

"Now I am back to work and if you do work or study get back to it. Stop being assholes to bands who were here before you joined Instagram and will be after you leave."

MOONSPELL's "Lisboa Under The Spell" live DVD/CD was released in August 2018 via Napalm Records. The live DVD/Blu-ray/3CD package captures the band's performance before 4,000 fans at the sold-out Campo Pequeno arena in their hometown of Lisbon, Portugal on February 4, 2017.

Meanwhile on #Instagram somebody has to lecture the fools. No need to thank me folks, read a book instead that makes me happy ? pic.twitter.com/EMA9HvqjaJ