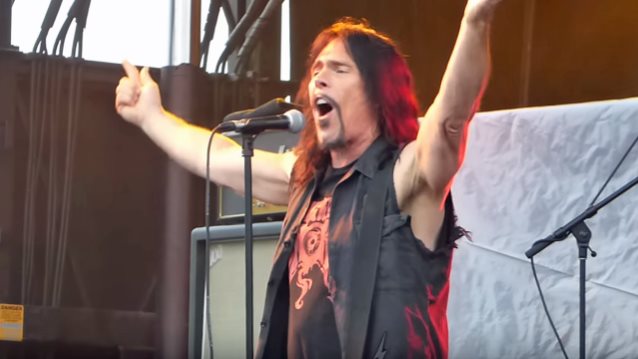 MONSTER MAGNET is "almost done" recording its new album for a tentative summer 2017 release. Speaking to the "Talking Metal" podcast, frontman Dave Wyndorf stated about MONSTER MAGNET's planned follow-up to 2013's "Last Patrol" (hear audio below): "The way I write is different than a lot of people. I write the music in my kitchen [in Red Bank, New Jersey] and lay it all out, arrange everything, and [I] don't really write the lyrics 'till I've recorded everything. So I just sat here in the kitchen, wrote the songs and brought it to the band and worked it out with those guys. And then went into the studio, like a good rock man should, I did drums, bass, guitars and [we're] almost done. All we're waiting for now is for that idiot singer to complete the lyrics and sing them, and maybe put a couple of leads on, and then it'll be ready to go. So, at this point, I'll be mixing in March."

Regarding the recording process for MONSTER MAGNET's new album, Wyndorf said: "In Long Branch is where I did the drums and bass — at a place called Shorefire, which is a really, really great place. Total old-school studio; you'd think you were in 1972 in there — wood, big room, big glass…. like really, really hot. And then once all that's done, I take it out and go to a smaller place — Studio 13 in Red Bank, which is Phil Caivano's studio, the guitar player in MONSTER MAGNET and my co-producer. And then we start doing leads and vocals and all that kind of stuff."

Wyndorf also talked about the overall musical direction of the new MONSTER MAGNET material, saying: "It's full-on rock — shorter songs. Yeah, it's 'fight' music. Still 'psych' in a kind of garage-rock kind of way and sound, and you'll hear echoes and stuff like that, but it's less longform."

He continued: "The last bunch of records, I went on a psychedelic tinge, as is my right to do. But after I do a couple of records that are completely psychedelic, it just overtakes me to just rock — just go out there and pummel it. So it's fast tempo and a lot of Detroit-style… That's the best way I can describe it, 'cause Detroit had this spirit to it, and even a sound — kind of droney strings, but still rocking. It's what I needed to do in order to live continually in 21st Century, which is completely out of its mind. So I needed something… I take the psychedelic stuff and get all cerebral and kind of ruminate on what's going on in the world in my head and in my music. And then, when I get so disgusted with the way the world is, then I strike back with my music, or me, in this way. So it makes sense."

MONSTER MAGNET's next disc will be the final release under the band's current contract with Napalm Records. "And then I'll see if they wanna continue or somebody else will wanna continue," Wyndorf told Sofia Live last year.

MONSTER MAGNET's last release was "Cobras And Fire (The Mastermind Redux)", which came out in October 2015. The album was dubbed an "alternative listening experience" to the band's 2010 effort "Mastermind". The approach was similar to what MONSTER MAGNET did in 2014 when they took "Last Patrol", pulled the songs apart and rebuilt them as "Milking The Stars: A Re-Imagining Of Last Patrol".