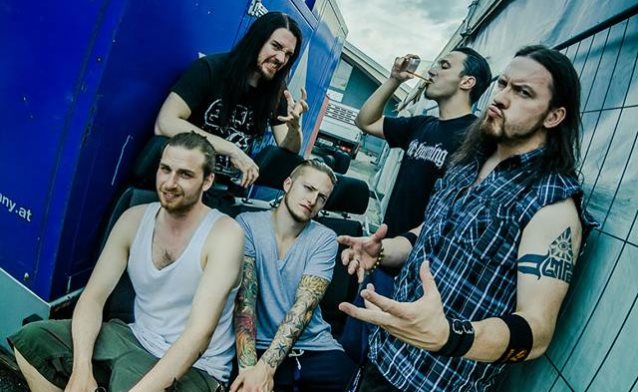 "It's been over 6 months since the last update, and therefore I must humbly apologize.

"Being the last original and founding member of MNEMIC, I feel that it's my responsibility and finally time to break the silence and shed some light on the band's current situation and prospect.

"I am sure anyone who have been following our endeavors, listening to our music, or had some sort of a relation to MNEMIC, have been wondering what's in the melting pot?

"The main reason for this update is because wherever I have gone, I've met people who have been asking me: 'When are you playing live again? When is a new album coming out? What's happening with the band? Why so silent? No news?'

"Well, here is a bit of background… When we started the band, we where influenced by 3 great artists, MESHUGGAH, FEAR FACTORY and STRAPPING YOUNG LAD (plus everything else Devin touched). We had a common artistic vision for the sound and look and a common goal when composing. We were all able to communicate musically on the same level, as we all contributed with our personal signature to the greater vision. Luckily, and fortunately, we ended up releasing albums on a great and big label, touring 4-5 continents, and even ended up touring and making friends with the bands that influenced us and hey, even METALLICA asked us out! Something most bands only dream of nowadays — call us extremely f**ing lucky.

"Fact is, people and situations change, and going through multiple lineup changes, not being able to generate an income from music and struggling to survive, so did the vision change.

"I will never be bankrupt on creativity, but my personal taste in music has also changed over the years. I am not interested in sparkling clean productions and djenty polyrhythmic one-stringed riffing, flavored with melodic choruses. I have written this type of music for over a decade, and to put it simply, I am sick and tired of it. To be completely honest I really dislike the djent genre, because no matter how extremely talented these musicians and bands are, no one can write a good song, and they all sound the same — at least to me. I am also pretty sure we have regressed as a band (or musicians), if some do consider us part of the djent genre?

"In conclusive, to everyone I have met, that have been asking, and anyone else wondering, all I can say is that there are no shows planned, no new music or a new album in the making. Why? Because there is no artistic vision any longer, and my heart is no longer into this music. I hunger for raw power, simplicity, and good songs. That is also why I thrive in a new formation called BLOOD EAGLE — check it out, its death metal, it sounds nothing like MNEMIC.

"It's a dynamic world and change is the only constant, if you do not continue to innovate or shift out, you will be out of the game. In other words, so is MNEMIC, therefore this is either a hiatus or a break-up. Only time will tell if we will get back together with the old or new lineup to make music again. In the meantime I would love to hear your opinions, what you think we should do, how much we suck, how much you love us, how much you would pay us to either shut the hell up or make some new music?"

MNEMIC's fifth album, "Mnemesis", was released in June 2012 via Nuclear Blast Records. The CD landed at position No. 38 on the Top New Artist Albums (Heatseekers) chart, which lists the best-selling albums by new and developing artists, defined as those who have never appeared in the Top 100 of The Billboard 200.

"Mnemesis" was recorded at Antfarm studios in Aabyhøj, Denmark with longtime producer Tue Madsen (THE HAUNTED, HIMSA, SICK OF IT ALL). The cover artwork was created by Metastazis (MORBID ANGEL, THE BLACK DAHLIA MURDER, PARADISE LOST, ULVER).