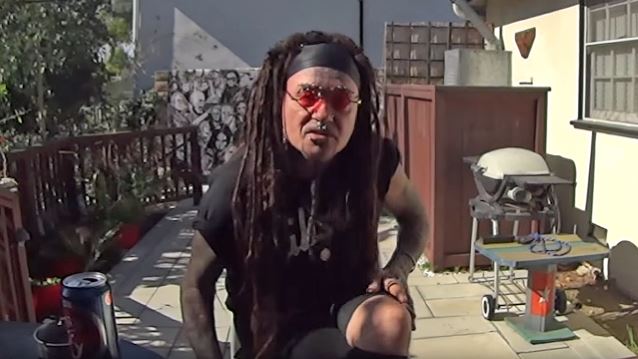 In a new interview with music writer Joel Gausten, MINISTRY frontman Al Jourgensen discussed the current political climate in Europe. He said: "I talk to these European people, and they're frightened as shit of the possibility of a [Donald] Trump [U.S.] presidency. What they don't do is look in the mirror and realize that the right wing is making a complete comeback in Germany and France. We had that in Germany before; I think that was right before Hitler came to power, if you recall. It's this sense of playing on people's fears, and this nationalistic fervor. All they want to do is tap into the anger as opposed to tap into the solutions. They're having the exact same crisis in Europe as they're sitting there bashing the Americans for being so stupid as to possibly even elect a Trump — which is not going to happen, okay? But because of the media, they're convinced it is [happening], because that's the only media they hear about. It's really an askew view of society in general. It also makes them feel better about themselves because, 'Well, at least we don't have Trump.' Well, guess what — you do. The National Front has gained seats in Parliament every year in France since the migrant crisis because they're playing on people's fears with the Middle East migrants, just as Trump is with the Mexican migrants here. It's all fear-based policies, and everyone is equally culpable for keeping that myth perpetuated."

In a separate interview with Smells Like Infinite Sadness, Jourgensen made it clear where he stands with respect to the 2016 presidential election. He said: "Listen, I'm not one of those people scared of fucking Trump because here's the simple fact: last time I checked, you need 51 percent to make a democracy work to get any agenda done. Okay? So over half the people. Well, the three out of ten people is the scary part, because they think Donald Trump's ideas are valid and good and that he's our savior. But it's no different from the rest of the world. If you look at Europe, instead of being afraid of Mexicans coming over the border, they're afraid of all the Middle-Easterners migrating away from war zones. So the rise of the right-wing racism, which is exactly the same as right before Hitler and Mussolini came to power in Europe in the early '30s, it's the same thing that's going on now…playing on those same fears in Europe and America and all that. But the last time I checked, it takes 51 percent to do it. And three out of ten are idiotic enough to buy into this fear mongering but you have to remember, the comforting part is that seven out of ten people actually think the guy's a douchebag! So I really don't see it happening, even though the media makes it sound like its imminent. They spend 23 and 1/2 hours of a 24-hour news cycle talking about Trump, and making it seem bigger than it is. It's not: seven out of ten people, fortunately…still have some semblance of cranial matter left."

Asked where he would put his money on in this election when it comes to the Democratic side, Hillary Clinton or Bernie Sanders, Al said: "Well, if I was a betting man, I would have already lost all my money on saying a clown like Trump would never get as far as he did, so obviously I'm not going to bet on it. But my sentiments actually don't align with anyone. Possibly the best choice, in my opinion, would have to be Elizabeth Warren. But she's not [running for president], so Bernie is probably the next closest thing. And if you listen to [MINISTRY's] 'From Beer To Eternity', which was recorded three years ago, I sampled Bernie because I thought a lot of what he said made sense. So it's pretty obvious where my heart lies. But if I was to bet? If it was between Bernie and Hilary? At this point, it almost doesn't matter, because the system is what it is and you can talk a good game and even if you take actions on your talk, it's always stifled by other special agendas and special interests who will block whatever you're doing. So it's a real broken system: democracy as it exists today. And obviously a big part of that is Citizens United and another big part is the media. I mean, just 23 and 12 hours of Trump a day? For what? I mean would we have 23 and 12 hours of David Duke? Because they're about the same thing."