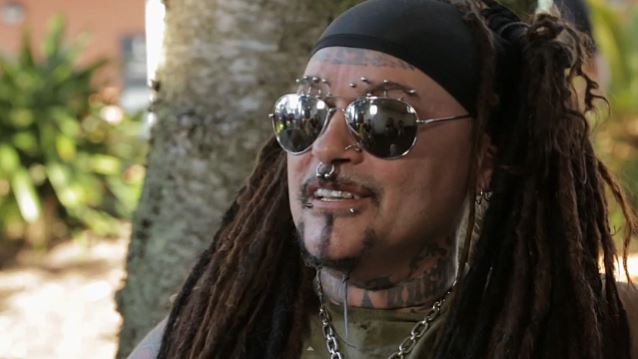 MINISTRY mainman Al Jourgensen was interviewed by U.K.'s Metal Hammer magazine during this year's Soundwave festival in Australia. You can now watch the chat below.

Speaking about his next project, SURGICAL METH MACHINE, which he will record later this year with his longtime engineer Sam D'Ambruoso, Jourgensen said: "I want to do, before my days in music are done, the fastest album in the history of human kind or computer kind. I don't want anything less than 220 or 240 bpm [beats per minute], I want a lot of political shouting and social commentary. If you can do it that fast, good luck to you. That's what I'm gonna try. And that's gonna be my final parting shot — just the fastest record in the history of the world. To make a 50-minute CD, I'll probably need about 30 songs."

He continued: "I just wanna do something so over the top that [I will have] left no stone unturned. I've done country, I've done jazz, rock, pop… I've done everything. I just wanted to leave with something that's just gonna… maybe, in about twenty years, people might understand it. As times get more frenetic, it might fit in. It won't fit in next year, or the year after, or the year after, but that's fine; I can wait. Just leave it out there, and just go out with a bang."

Jourgensen also talked about MINISTRY's status as one of the pioneers of the industrial metal movement. He said: "ZZ TOP uses sequencers, so do you consider them an industrial band? I don't. I consider them a good band. Us? I don't consider ourselves industrial. I consider us doing what seems to fit right for us."

He continued: "I don't wanna be part of a scene. I don't know of an industrial scene. I don't know of industrial bands…. I mean, if you really go to industrial bands, go back to STOCKHAUSEN, or THROBBING GRISTLE, or [EINSTÜRZENDE] NEUBAUTEN, or SPK or… so many bands. They were really doing… even KRAFTWERK… doing things methodically and through keyboards as opposed to rocking and all that. We've kind of been a hybrid. So I don't really consider myself part of any scene, I just consider myself part of getting my ass on stage and doing a good show. That's what I consider myself a part of. That's it."