Al Jourgensen scored, music-supervise and created the soundtrack for "Wicked Lake", according to the film's executive producers Carl Morano and John Carchietta of Fever Dreams, the feature's production company.

Jourgensen also performed a small role in the film as a perverted art professor. "Not exactly a stretch for me," Jourgensen stated.

"Wicked Lake" was directed by Jourgensen's good friend, filmmaker Zach Passero. Passero, whose past feature credits include "The Big, Weird and Normal" and "Motel: Glimpse", directed MINISTRY's video "Lieslieslies" (2006) as well as hand-rendering the animated video "Fire Engine" for Jourgensen's side project, THE REVOLTING COCKS. Jourgensen and Passero first met on the set of MINISTRY's "No W" video at Sonic Ranch, TX in 2004.

"Zach is one of the most talented, driven young artists I've met in a long time," said Jourgensen. "We both have the same twisted penchant for dark humor, so it's a match made in horror hell."

While "Wicked Lake" is Jourgensen's debut scoring for a feature film, it's not his first foray into soundtracks, as he wrote and performed tracks for Steven Spielberg's "Artificial Intelligence: AI" (2001), Paul Verhoeven's "RoboCop" (1987) and "The Matrix" (1999) — the soundtrack captured a Grammy.

Jourgensen wrote, produced and recorded the music for "Wicked Lake" at his El Paso, TX compound. 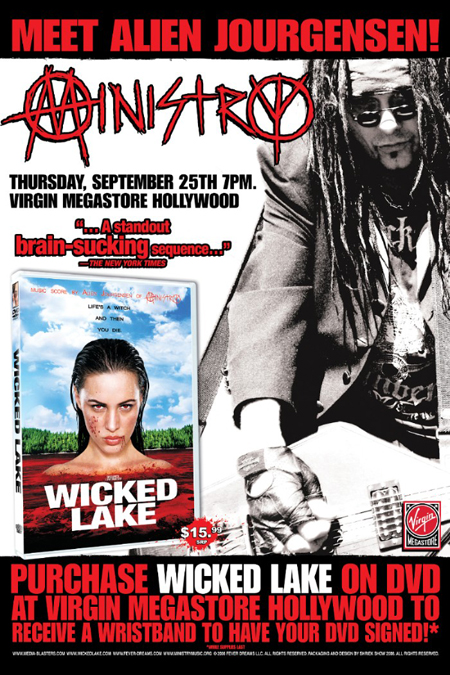