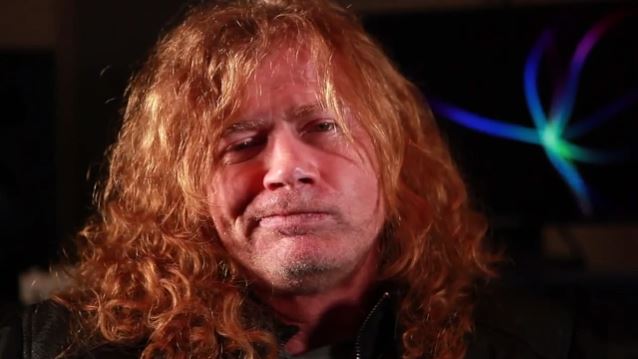 Earlier this month, Cutter of Envision Radio Networks' "Hangar 19" podcast conducted an interview with MEGADETH mainman Dave Mustaine. You can now listen to the chat using the audio player below. A couple of excerpts from the interview follow (transcribed by BLABBERMOUTH.NET).

On the songwriting process for MEGADETH's follow-up to last year's "Super Collider" album:

Mustaine: "Believe it or not, I've been up since 6:45 editing drum tracks [on a demo version of a new MEGADETH song] in my studio…

"Sometimes bands wait a long time in between [releasing albums]. We've never really had that problem, because there's so many people that, when they make a record, they kind of rest on their laurels. And I think that's really great if you make a great record, but if you're a musician and you've got it inside of you, share it, man — share it with the world.

"In heavy metal, it's not like we're writing songs like U2 where they're all something that's gonna be evaluated by the entire world and you live and die by your songs. Heavy metal's more fun, I think, where you can have your friends listening to music and jam and solo and stuff like that. It's just, for me, I enjoy [composing original heavy metal music] more than when I was playing cover songs when I was a kid doing rock songs. It's a totally different mentality."

On the lyrical inspiration for the songs that will appear on the next MEGADETH album:

Mustaine: "The track I'm working on right now is called 'Why We Lie To You', and it's another friendly little political song about the stuff that they keep from you — kind of like if Jack Bauer [the fictional character and the lead protagonist of the Fox television series '24'] was in a band, what he would sing about.

"Anybody that watches the news nowadays… I watch the news, I read voraciously, I am a New York Times best-selling author, so obviously I know a little bit about writing and reading, and when you think about what's going on in our world as we know it, especially our nation here, it has totally changed, and it's not the same country that it used to be. It's really a drag, and the gutless people in Congress won't do anything about it. You see what's going on with our borders.

"I live in San Diego, and I can get along peacefully with any nationality and anything like that, because I'm an international rock star, but when it comes down to destroying a country for pandering to lobbyists and stuff like that?! Hum-um. The Supreme Court rules 9-0 against the President overusing his powers? Hello?! In 2008, I said that [President Obama] was gonna be the most divisive president ever, and I was right. He's got the lowest approval ratings in the history of America.

"That's one of the things that's a bummer, because people said that I was a Republican. I'm not a Republican. Go back and look at the history when I covered the Democratic National Convention and helped get Bill Clinton into office. I met him at the White House. We went up there to do the 'Rock The Vote' thing. I mean, I didn't get stoned on the roof like Willie Nelson or anything, but… [chuckles] I was very active in what I thought was a promising new America and we had a great economy at the time, but God, I mean, look at the way things are right now.

"I had the surgery on my neck and I was going to get a doctor's appointment yesterday to get a CT scan, 'cause I've got a pinched nerve, and they said, 'Well, we've gotta apply to see if you can get approval for a CT scan.' And I said, 'You know what?! I'm a freakin' millionaire, and for me to have to go in there and ask somebody to get an X-ray? Shame on you, guys. 'Cause if you're doing this to me, what are you doing to the middle-class, what are you doing to the lower-class people?' I was a poor kid, but that stuff pisses me off. And that's gonna come out in the [next MEGADETH] record, trust me!"