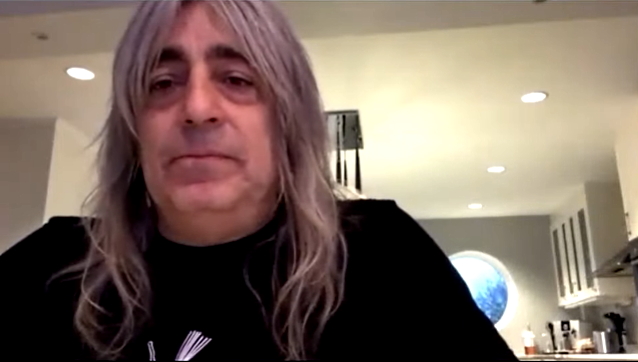 Former MOTÖRHEAD and current SCORPIONS drummer Mikkey Dee was recently interiewed on "Drum For The Song", the podcast hosted by Dane Campbell, son of ex-MOTÖRHEAD guitarist Phil Campbell. You can now watch the chat below.

Asked what the main difference is between playing with MOTÖRHEAD and touring with SCORPIONS in terms of how he paces himself for each individual band's setlist, Dee said: "A lot of people say, 'Hey, listen, Mikkey, you're probably sleeping through the [SCORPIONS] set.' And I'm telling you, this is so much more demanding than MOTÖRHEAD ever was, physically. Because, as you know, if I was starting to lose my breath here and there with MOTÖRHEAD, I could just shout at your dad or Lemmy and go, 'Hang on, boys. Have a drink,' and pretend to tune up the snare a little bit. And Lemmy and Phil, they were not very hard to [convince] to get a break. They went around their stacks and took a drink, and we said, 'Cheers,' and you could even actually have a chat on stage for a while. But with the SCORPIONS, it's all on a click track, because of our screens — the production. And I do play around the click, but it has to work with the lyrics and stuff on the screens and what's going on with the production, which we never had with MOTÖRHEAD.

He continued: "So every show [with the SCORPIONS] is exactly the same length — on the fucking second or minute… Klaus [Meine, SCORPIONS singer] cues whatever he says. So it could be one or two minutes difference between the sets, on two-and-a-half-hour sets. So it's very demanding. It goes up and down, the set, and there's a part in the set after we've done the acoustic medley, and then we come up and do 'Wind Of Change' — I'm actually freezing on stage. And then it's about 40 minutes, 45 minutes of non-stop… We do heavy, heavy songs, and a drum solo, straight into 'Blackout', straight into 'Big City Nights'. I mean, there's 45 minutes where I don't even have a chance to change drum sticks. So that is very, very demanding for me. But it's great — it's a challenge, and I love it. But the more tired I get on stage, the better I play."

Mikkey added: "We usually did 90 minutes, with MOTÖRHEAD, and when we played with other bands, it could be 60 or 70 minutes. But MOTÖRHEAD, we controlled the set ourselves, and here and there, Phil ran outside and changed his guitar or took a piss, or Lemmy disappeared off stage and no one knew what he was doing. We could run it ourselves more in a different way."

Dee also talked about the progress of the recording sessions for SCORPIONS' new album, which is tentatively due later in the year. The disc was recorded in part at Peppermint Park Studios in Hannover, Germany and will mark the German hard rock legends' first release since 2017's "Born To Touch Your Feelings - Best Of Rock Ballads", which was an anthology of SCORPIONS' new and classic material.

"Most of the songs have been written by Rudolf [Schenker, SCORPIONS guitarist] and Klaus, and some of Matthias's [Jabs, guitar] stuff, but in the studio now, we've been changing quite a bit," he said. "So I don't feel like I'm actually writing the songs with them, but I definitely made a lot of changes with the guys. And all four of us are playing live in the studio. It's a big, big room, and we all have our separate station. And Klaus has sang some scratch vocals on all these songs, so he can cue on stuff and see what actually the song is all about. But the actual music is played live. And I have no idea if SCORPIONS ever did a record like this — maybe in the '70s. So it's a heavier record. It's gonna take a lot of people [by] surprise. It's a very wide album. It's gonna be classic SCORPIONS stuff, and it's gonna be almost songs [that sound like SCORPIONS have gone] back to the '70s. I'm really looking forward to listening to this as a finished record."

Meine recently said that SCORPIONS' new LP will feature "no outside writers at all," unlike 2015's "Return To Forever", which was largely co-written by the album's producers, Mikael Nord Andersson and Martin Hansen.

SCORPIONS' last full-length collection of new recordings was the aforementioned "Return To Forever", partially comprising songs the band had in the vault from the '80s. It was the final recorded appearance of SCORPIONS' longtime drummer James Kottak, who was dismissed from the band in September 2016.