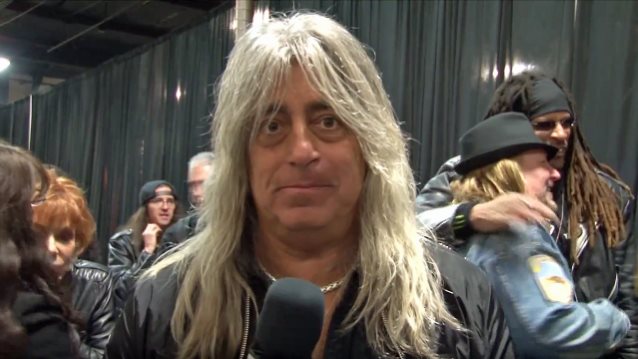 On January 18, David "Gus" Griesinger of BackstageAxxess.com conducted an interview with former MOTÖRHEAD and current SCORPIONS drummer Mikkey Dee at the Hall Of Heavy Metal History all-star induction ceremony at the Anaheim Expo Center in Anaheim, California. You can now watch the chat below. A couple of excerpts follow (transcribed by BLABBERMOUTH.NET).

On the fact that it has already been more than a year since the passing of iconic MOTÖRHEAD frontman Lemmy Kilmister:

Mikkey: "That's really weird. That is weird. And just the other day I was thinking, it's been so long since I've talked to him. Because even if we had a break here and there with MOTÖRHEAD, we always spoke to each other. Maybe not every week — he was in L.A. and I was in Sweden — but every other week at least. He'd call me, or I'd call him, and he'd go, 'What the hell's happening, Mik? Are we getting out there?' You know, we always had something. So it's unbelievable — a full year. Well, he's up there, or down there, or wherever he is. And hopefully he enjoys what I'm doing. I know he loved SCORPIONS. He respected that band tremendously. He kept saying, 'Oh, they played longer than us.' It's a real band. As I said in a lot of interviews, every snare hit I do from now on will be a small tribute to my friend Lemmy. And that's how I feel."

On SCORPIONS' plans for the coming months:

Mikkey: "It's gonna be touring. SCORPIONS, a while back, wanted to have a bit of a break, and that's where we are right now. So it'll be several months now where we're just relaxing. They've been touring so hard, and so did I. So it feels pretty good. But by spring now, we're gonna get together and then we're gonna tour our asses off, really. And then hopefully maybe next year we'll get together and we can produce an album. I don't know. It's a little up to the guys, and we'll see what happens."

Dee joined SCORPIONS last September as a permanent replacement for the band's longtime drummer James Kottak, who was previously said to be on a break while he sought medical attention.