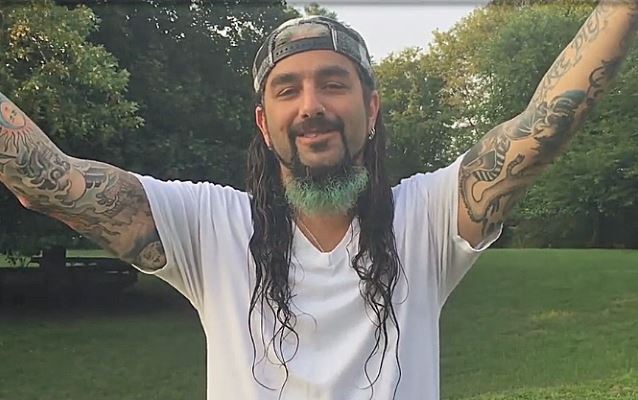 Former DREAM THEATER drummer Mike Portnoy will perform the band's "12 Step Suite" in its entirety at next year's edition of the ProgPower USA festival, set to take place September 8-9, 2017 in Atlanta, Georgia. The music documents the musician's battle with alcoholism, and is an ensemble of five songs recorded by the band from 2002 to 2009, with titles that reflect his struggles: "The Glass Prison", "This Dying Soul", "The Root Of All Evil", "Repentance" and "The Shattered Fortress".

Said Portnoy: "When I came up with the idea of writing a multi-part suite that spanned five DREAM THEATER albums, (which ended up taking eight years to complete), it was always part of my master plan to perform it in its entirety, live on stage. Unfortunately, after completing the final piece of my conceptual puzzle, I was never able to perform this creation with DREAM THEATER. Now I've decided that I owe it to the fans to finally bring my '12 Step Suite' to life on stage as I always had dreamed.

"I'm gonna be playing this with an incredible band of some of the best musicians in prog today, with some great friends, great musicians. We've got a lot of cool stuff in store, and I can't wait to be doing this exclusively at ProgPower 2017. See you there."

The ProgPower USA 2017 billing is as follows:

Portnoy's first performance of the "12 Step Suite" will actually take place on next February's Cruise To The Edge music vacation, where the drummer will also celebrate his 50th birthday.

Asked in a 2015 interview with Loudwire if it's true that he quit DREAM THEATER due to the fact that he wanted a five-year break from the band but the other guys in the group disagreed, Portnoy said: "Well, I mean, obviously, the fact that I left the band is a fact. But the five-year break thing is fiction. That's a… What is it called? Not a rumor… a myth… urban legend. The five-year thing is an urban legend. I never said five years. I just wanted to have a hiatus. Just 'cause we had been going 25 years — boom! boom! boom! — with no break. Write-record-tour, write-record-tour, and it was burning me out. It didn't mean I wanted to stop making music. One of the biggest misconceptions was, after I left DREAM THEATER, I went off and did, like, five different bands and side projects. Everyone was, like, 'We thought you wanted a break.' And it was, like, well, I didn't want a break from making music; I just needed a break from the DREAM THEATER camp. It was 25 years without a break in that camp, and I was just fried. I needed other people and other musical outlets in my life. But the five-year hiatus, I think… I had suggested hiatus of any length, it somehow got misinterpreted as a five-year… which, coincidentally, would have been now. So it would have been up by now, actually — if it was a five-year hiatus."

Portnoy was also asked whether it's true that he offered to return to DREAM THEATER shortly after quitting the band, but that his offer was rebuffed via DREAM THEATER's lawyer. He responded: "I'll just say that there was… Once I left, there was a tremendous amount of legalities and technicalities, so I'll just say that I was doing whatever it would take to keep peace and keep things going smooth. And at that point, they were just only speaking through their lawyer. But it's a 25-year relationship coming to an end, so, obviously, it goes very, very deep, not only personally and emotionally, but also legally, and all the red tape that's involved with something like that. So it was a tough time, a tough period, and, luckily, we all got through it. But, yeah, I don't wish that kind of stuff on anybody in a band. It's tough."