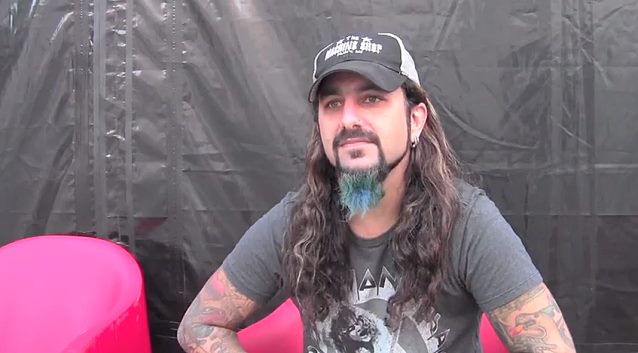 Asked what led to his departure from ADRENALINE MOB, the band featuring Russell Allen (vocals; also of SYMPHONY X) and Mike Orlando (guitar), Portnoy said: "I'm very proud of the album I made with ADRENALINE MOB and I think that there was really a great chemistry there; it was a great band. I was definitely behind it. I spent two years of my life developing it and trying my best. But at the end of the day, I came out of DREAM THEATER wanting to do a lot of different things, and I wasn't ready to commit exclusively to any one band. I had just spent 25 years with one band — and side projects, obviously, but committed to one band. And I said right from the beginning I was gonna plant many different musical seeds and see which grew, and that would kind of dictate where I would go and what I would do. And I spent a good solid two years giving my all to ADRENALINE MOB. But it only blossomed a little; I kept waiting for it to truly blossom and waiting for touring opportunities to come around, which never happened, and waiting for certain things to happen that never happened, so when it came time for them to start to want to do a new record, it's, like, well, I have five months of THE WINERY DOGS dates on the calendar, so I had to make a decision; I couldn’t be in two places at the same time. Luckily, up until now, I've been able to juggle all these different things and make the schedules work out, but finally it came to a head where it's, like, 'OK, do I do a record with ADRENALINE MOB or do I tour with THE WINERY DOGS?' And it's, like, well, ADRENALINE MOB is not really growing fast enough. I don't have time to get into a van and play to a hundred people a night for the next ten years to develop this when I have other opportunities and things like THE WINERY DOGS and other things that are offering opportunities and situations that I need to follow through with. So I haf to make a decision, and one shoe had to drop, and unfortunately, it happened to be ADRENALINE MOB."

He continued: "[They're a] great band, and I would have loved to have done more if they could have worked around my schedule, but I understand that they wanna keep working. So I had to make a decision and THE WINERY DOGS has a lot of buzz and opportunity and possibility and potential, so I didn't want to not give it a fair chance."

In a recent interview with Brazil's "Wikimetal", Allen stated about Portnoy's departure from ADRENALINE MOB: "He's been, obviously, real busy with THE WINERY DOGS, which is his next band that he's doing. The truth of it is we wanna keep working, we wanna keep doing ADRENALINE MOB and we don't wanna wait around for Mike to have the time [to put into ADRENALINE MOB]. And he doesn't know when he will have the time again, so that's really what's going down. Mike Portnoy was asked to be in the band by myself. Me and Orlando had already written all the material, so [ADRENALINE MOB's debut album] 'Omertá' was completely finished before Mike joined the act. And it's a bummer, but he's got his sights on other things, and he's not gonna stick around. So we wish him the best of luck, but the MOB's gotta go on."