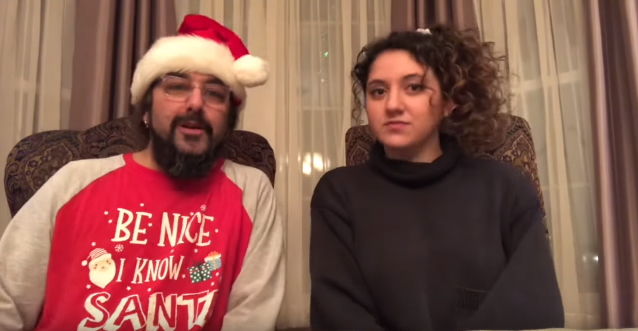 Mike Portnoy's 22-year-old daughter Melody recently challenged the former DREAM THEATER and current SONS OF APOLLO drummer to a game of "Beatles: Name That Tune". You can watch the seven-minute clip below.

In a 2011 interview with Music Radar, Portnoy spoke about what sets YELLOW MATTER CUSTARD apart from other BEATLES tribute bands. He said: "I think there's two things: We're all notable players from other bands. You know, you don't see guys like Sebastian Bach getting together with Scott Ian and Jason Bonham to do BEATLES tributes. So I think the fact that we're all name players sets us apart. And then Paul Gilbert and I come from backgrounds that are so different from what BEATLES music is generally known for — that makes it different, too. The other factor is our setlist. Most BEATLES tribute bands from here to Tokyo are doing 'She Loves You', 'I Want To Hold Your Hand', 'Yesterday', whereas with us, I think it's cooler to dig deeper into the catalogue. Who else does 'Think For Yourself' or 'You Know My Name (Look Up the Number)'?"

Portnoy said that he is amazed at what THE BEATLES accomplished in such a short period of time.

"The length of time is astonishing," he said. "From 'She Loves You' to 'Tomorrow Never Knows' is only three years. That's unbelievable. You look at the clean-cut guys on 'Ed Sullivan' in 1964, and then in '67 and '68 they're full-blown hippies with beards and long hair — and that's only three years later! They accomplished, in seven years or so, what most bands don't — musically, personally or stylistically — over a 30-year career."

Asked why he feels that Ringo Starr is often maligned as a drummer, Portnoy said: "I never listened to the drums in 'Penny Lane', for instance. I've been listening to that song for 40-something years. Heard it a million times, know the song inside and out musically, melodically, the production… I didn't pay attention to the drumming until I had to learn the drums for this. And I listened to the drumming in the song...it's genius. He's playing the most perfect part.

"It's not about how Ringo played; it's about what he played, and what he played for the song. He was perfect for the band, and quite groundbreaking. You know, until then, there weren't any drummers that were playing what he was playing. If you watch those early '64 recordings, he's really digging in and playing with a lot of fire. And then the Keith Moons and John Bonhams and Mitch Mitchells and Ginger Bakers came along, and everybody started to disregard Ringo.

"But Ringo's inventiveness on 'Penny Lane', for instance, and the way he applied the drums…and if you listen to 'Lady Madonna', there's two different drum tracks going on there. I had to figure out what to play for [YELLOW MATTER CUSTARD], because one track's doing a shuffle [imitates the sound], and then the other's going [imitates a pounding floor tom]. And in every BEATLES song, you'll hear tambourines and cowbells and all of these inventive applications of drumming and percussion. Some of that might have been George Martin, but ultimately, Ringo was doing it. He gets all the credit in the world in my book for doing that."