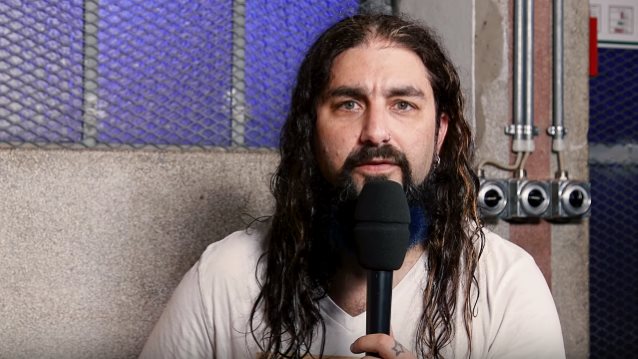 Mike Portnoy says that has "no longing to reunite" with DREAM THEATER but says that he would return to his former band "for the fans."

Portnoy, who co-founded DREAM THEATER more than thirty years ago, abruptly quit the band in September 2010 while on tour with AVENGED SEVENFOLD. He has since been replaced by Mike Mangini (ANNIHILATOR, EXTREME, JAMES LABRIE, STEVE VAI).

Asked in a new interview with Rockhok how sure he is that he will never get on stage with DREAM THEATER again, Portnoy said (see video below): "Well, I normally dodge these questions, but I'll answer it. The ball's in their court, to be honest. I have no longing to reunite with them; it's not something I necessarily am looking to do or want to do. I'm very content with all the eighty-seven bands I currently have going, so it's something I need. But I would do it for the fans, because I'm a very sentimental person and I have a lot of great, fond memories of those guys and the times. I'm a sentimental guy, so I would never close the door on it. So, really, the ball's in their court, honestly. [But] if you're asking me the odds [of a reunion happening], I would say, don't bet on it, because I know their personalities as well and I don't think they're the type that are looking backwards. Although they're out there playing [the 1992 DREAM THEATER album] 'Images And Words' [in its entirety on tour], but that's their choice."

Portnoy added that he is "always [just] a phone call away" from playing with any of his former bandmates. "I mean, I would reunite with them, I would reunite with TRANSLATLANTIC, I would reunite with OSI… anybody," he explained. "I'm generally, like I said, a sentimental guy and I don't hold grudges. Life is too short for resentments and I always forgive. So, yeah, the door is always open for me. But, that being said, like I said, it's not something I'm looking for or wanting to do. I would be very content to never do it again, and this is some nice closure, with the SHATTERED FORTRESS shows. If this is the end, it's giving me a nice feeling, and I think it's giving the fans a nice feeling as well. If there's more in the future, that's their phone call to make."

Portnoy is playing shows throughout the world with his SHATTERED FORTRESS project. He is joined by an all-star prog lineup for the tour, including Ross Jennings on vocals, Eric Gillette, Richard Henshall and Charlie Griffiths on guitar, Connor Green on bass and Diego Tejeida on keyboards. Together, they are performing the "12 Step Suite" in its entirety, as well as a a couple of other classics. "12 Step Suite" documents Portnoy's battle with alcoholism, and is an ensemble of five songs recorded by DREAM THEATER from 2002 to 2009, with titles that reflect his struggles: "The Glass Prison", "This Dying Soul", "The Root Of All Evil", "Repentance" and "The Shattered Fortress".

Portnoy, who celebrated his fiftieth birthday on Cruise To The Edge this past February, said that it was always part of his master plan to perform "12 Step Suite" in its entirety live on stage with DREAM THEATER. However, his exit from the band made that impossible.