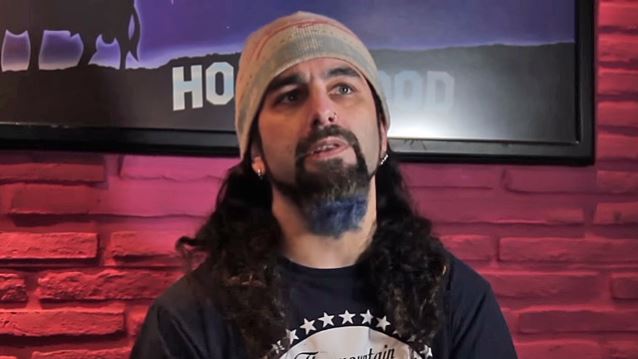 Spain's RockMAP recently conducted an interview with drummer Mike Portnoy (DREAM THEATER, THE WINERY DOGS, AVENGED SEVENFOLD). You can now watch the chat below. A couple of excerpts follow (transcribed by BLABBERMOUTH.NET).

On being named "best drummer" by various magazines and web sites:

Portnoy: "All the awards, to me, they're very flattering, but they're also intimidating, because they then put this expectation on me. I don't consider myself a great drummer. I consider myself just a music fan that's a very, very passionate artist, and the drums just happen to be my instrument. But every time I win one of these awards, it's nice, but I almost feel like, 'No! No!' I don't want people to think that I think I'm this great drummer, because, to me, I'm just a kid playing drums, and I love music. I don't even like doing drum solos live; to me, it's, like, 'Ehhh.' It doesn't really interest me."

On why he no longer does drum clinics:

Portnoy: "I stopped doing drum clinics about twelve, thirteen years ago. In the '90s, I did hundreds of them, and it was a good thing for me at that period of my life. But now, at this stage of my life, I have other interests. I'd much rather play with other musicians and make music and be a drummer in the context of a song. So these kind of drum festivals, I stopped doing them, just 'cause… I have no interest in playing drums by myself and doing drum solos and talking about technique. I'm just at a different phase in my drumming."