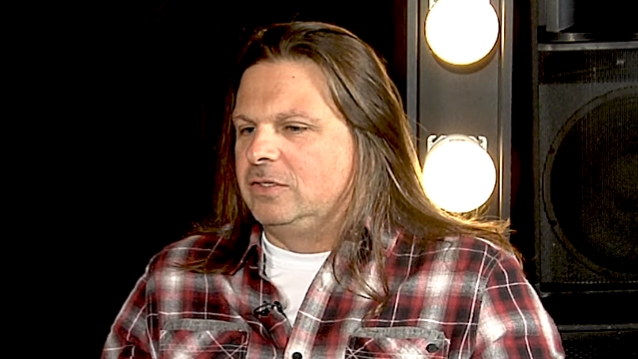 Asked by iRockRadio.com in a new interview how the STAIND reunion came about, Mushok said (see video below): "Aaron and I have been talking for years: 'When is the time right to play?' So it was really just trying to put that together and make it work.

"Danny Wimmer, who owns all those festivals, is a really good friend. And Danny's actually been… [Laughs] I'd get a call, and he's, like, 'I need to make an announcement. Does STAIND wanna play the show?' So, Danny absolutely played a big part in really helping get that together.

"When STAIND first started working with Fred Durst in Jacksonville, Danny used to run a club down there called the Milk Bar. And I remember we played a New Year's Eve gig there opening for LIMP BIZKIT. That was the first time I met Danny. I wanna say that was in '97. I've known Danny forever. And he was our A&R guy at Atlantic Records for a minute, then he went on to do Danny Wimmer Presents, so we've had a long history with him. He really wanted the band to play again. I think he helped get everybody to the point where it's, like, 'Let's do this.'"

"I think for me, in a perfect world, it would be great to be able to go out and do a handful of STAIND shows," he said. "We don't have a label. It would be great to write some music. It doesn't have to be a full record at this point, 'cause we don't have that obligation. We have a studio, and it would be easy to do. I think right now, it's, 'Let's get in a room together. Let's play together again. Let's do a couple of shows and see how it goes,' and kind of take it from there."

Asked why it is important for him and other musicians to continue to make new music in addition to going out on the road, Mike said: "I'm a musician. I love writing music and creating music. It gets me excited. I'm always very proud of what Aaron and I did together. He's super talented, and I really enjoy bringing my ideas to him and seeing what they become at the end. So the idea of being able to do that again, I'd love for that to be able to happen.