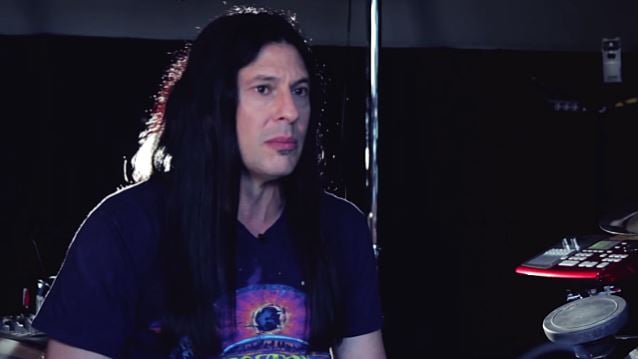 In a brand new interview with Chile's Radio Futuro, DREAM THEATER drummer Mike Mangini was asked about his predecessor, Mike Portnoy, who co-founded the band more than 27 years ago but abruptly quit DREAM THEATER in September 2010 while on tour with AVENGED SEVENFOLD.

"Mike was the drummer in DREAM THEATER before me, so I've had a chance to spend time with his drumming, because it's my job to learn his parts," Mangini said. "And I find that Mike's drumming is very… it fits the music. It makes the music simple to be followed. So he has good thinking in his creativity with his drum parts. That's what I like."

Portnoy tried to rejoin DREAM THEATER months after he quit, and was rebuffed.

In July 2013, Portnoy was asked by Chile's Radio Futuro whether he would one day be willing to reunite with DREAM THEATER and rejoin the band as their drummer. "Sure," he replied. "I would do it in a heartbeat. They are the ones that have closed the door on it. I've only needed a break, and I've had that break. So I'm ready, willing and able. But I honestly don't think they ever will; they've closed their door on it and I think they're too headstrong in having to prove themselves without me. So I wouldn't count on it. But my door is always open."

In an interview with the same radio station conducted a couple of weeks later, DREAM THEATER frontman James LaBrie was asked to respond to Portnoy's comments. "That possibility, I don't see it ever happening; it's not gonna happen," the singer replied. "Because, first and foremost, Mike Mangini is a full-fledged member of the band now, he's a phenomenal drummer and he's doing everything that we could possibly want as a drummer in a band. He's helping us realize exactly what we wanna do right now musically. And he will be our drummer until the day that we finish doing this, when we conclude.

"Mike Portnoy was a big part of our past, but I think that's where it's going to remain. He was a drummer from the past. And as far as presently and into the future, it will be Mike Mangini, and we all feel very strongly about that. He's an incredible drummer, he's an incredible asset to the band, and he is fulfilling our wildest dreams as far as what we're doing musically and what we're doing with each album. So that's the way it stands."