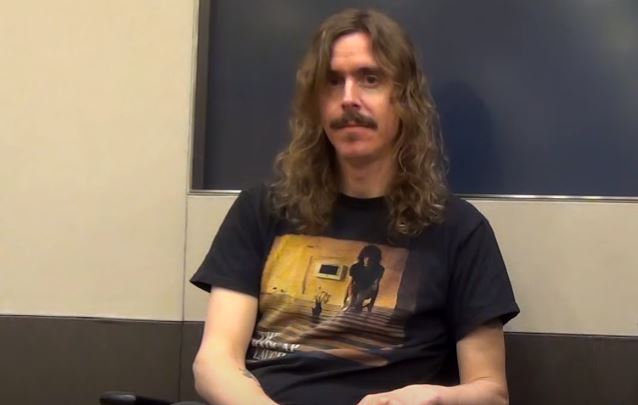 Maniacs Japan earlier in the year conducted an interview with Mikael Åkerfeldt (guitar, vocals) and Fredrik Åkesson (guitar) of Swedish progressive metallers OPETH. You can now watch the chat below. A couple of excerpts follow (transcribed by BLABBERMOUTH.NET).

On OPETH celebrating its 25th anniversary this year:

Mikael: "I feel like I am 25 years old, not the band, so it makes me feel a bit old. But it's great. I mean, being around for 25 years, that's an achievement, especially knowing what I know about the band and everything we've gone through to keep it together. And we haven't kept it together; there's been people coming and going in the band. I'm the only constant member since the beginning, you could say. So it feels weird; that number feels weird: 25 years. But I'm happy. I mean, the band is, I would say, stronger… this lineup is stronger than ever. It's tighter. We're good friends. We have fun. We do some good music, we think. And [we're] still active. There's still a demand for us. We can still go out and play and tour and work with something that we love doing, so that's fantastic, you know. I cannot complain, apart from the fact that it's been so damn long, you know. 25 years — I mean, that's crazy."

On the musical direction of OPETH's next album:

Mikael: "We don't really know. That's the beauty of it. Even if it sounds negative, it's not meant to come across like that, but I see each record as a possible last record. But I think it's a healthy thing, to not look into the future too much, for me. I've never been one of those guys; I just live in the now, kind of. So I can't really see where we're gonna take it musically. I think there's another [OPETH] record [in the future], that we're gonna put out more records. So I'm excited about that. But when I think about the future, the thing that excites me the most is the fact that I don't know what's gonna happen — to keep it fresh and exciting for us too. So we don't have a plan for the future, but we hope that there is a future."