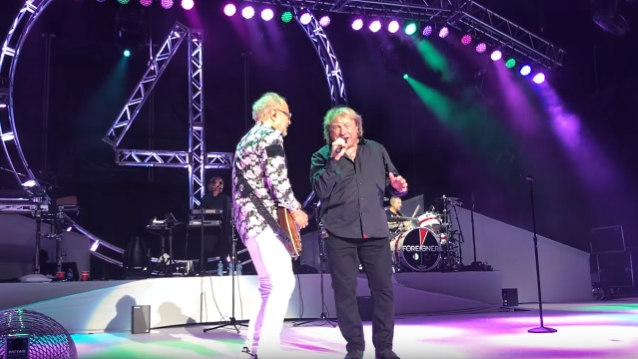 FOREIGNER's founding guitarist Mick Jones and original vocalist Lou Gramm recently spoke with Tom Power of the Canadian Broadcasting Corporation (CBC) radio program "Q" about "Jukebox Hero The Musical", which premiered in Toronto on February 20. The full conversation can be streamed at this location. A few excerpts follow (as transcribed by BLABBERMOUTH.NET).

On how Diana Ross helped to inspire "Jukebox Hero The Musical":

Mick: "I was in a lounge in [the] Atlanta airport, and the flight had been delayed, so they put us in this room. I walk in, and there's Diana Ross. I'm like, 'Whoa.' Stunning, as she always has been. I think she had just come off 'The Wiz', the musical. Out of the blue, she said, 'You know, you have a great title for a musical. You have a song called 'Juke Box Hero', and that lends itself really to a stage setting.' She was very encouraging. I didn't know whether she even knew our songs at that point. She put the seed in my brain somewhere. I kept it there for years... I had been perusing scripts — books, they call them — and I didn't have a clear picture of what I wanted to do. We were approached by some friends up here who seemed to be very keen on the idea of putting a show together."

On how Gramm felt when he heard that FOREIGNER's classic hits would serve as the basis for a musical:

Lou: "I was stunned. I thought it was a great idea, and almost overdue, I thought. Between the catalog and songs like 'Juke Box Hero', it really does lend itself to a musical."

On how it feels to watch other singers and musicians performing FOREIGNER's music:

Mick: "It is a bit... it's absolutely different. You do all the preparation for everything, and you kind of [let go]. I was present really just from the musical point of view as to the quality of the cast — singers that could sing. As Lou well knows, these are very demanding songs to sing. I didn't quite know what to expect the first time, and after being there for a couple of days, I saw the first run-through. I have to say, I was stunned. The realization that this was actually something that had come out of our work together, it was spacey. I was out of myself."

On working with one another again after years of being estranged:

Mick: "It kind of started when we were inducted into the Songwriters Hall Of Fame. I think it dawned on both of us, 'Wow, we actually have something here that we've created.' It's a body of work. It's two people working together under very hectic conditions sometimes, very demanding, very crazy. We've been through the gamut of different feelings at different times. We've survived. When we came out, punk was just coming out. Disco was at its height. Then new wave came along. We've kind of ridden [out] all those storms. I think it dawned on us... We saw each other, and it was like a family reunion without all the relatives. [Laughs]"

Lou: "It's great. As Mick said, when we were inducted into the Songwriters Hall Of Fame, that was something we were going to be inducted in together. We were asked to perform, and when we rehearsed for that performance, that was really the first time I'd seen Mick in a long time. I was wondering if it was going to be stiff or uncomfortable or whatever, but I think we warmed right up to each other. The rehearsals went well; the performance went well; and it was such an honor to receive that award with my writing partner and my friend. It was very emotional, and it felt great to play those songs that night."

On FOREIGNER's recent "Double Vision: Then And Now" concerts that featured members past and present:

Mick: "It's been going down like a house on fire. The fans seem to really love it. I think it's cool for us. The last one we did — I think it was in Atlantic City — I looked over at Lou and Ian McDonald, and suddenly I was back in the pub about 30 years ago. It was an incredible feeling. I got this feeling — very emotional. I'm sure it's done us all very well."

Lou: "I am enjoying these shows as well, very much. I enjoy playing these songs with the people that recorded them, and it does bring back those very special memories. It was really an awesome time when those songs first came out, and we were an up-and-coming band. As far as something in the future, I honestly don't know. I know that Mick and I have some songs and song ideas that we've had for a dozen years or more, and we've been meaning to take a look at them. I'm not sure what we would do with them, but I'm interested in finding out."

"Jukebox Hero The Musical" is a coming-of-age saga featuring 16 of FOREIGNER's iconic Top 30 hit songs. It tells the story of the closing of the rust-belt town of Blaydon, Pennsylvania's biggest factory. Confronted with a deluge of unemployment and instability, the community calls on Ryan, a local boy turned rock 'n' roll superstar, for help. Yet Ryan never left his roots on good terms, so must confront the ghosts of his past as well as a home he no longer recognizes.

"Jukebox Hero The Musical" features book by Dick Clement and Ian La Frenais ("The Commitments", "Across The Universe"), along with an artistic team led by Jones and FOREIGNER's managers Phil Carson and Stewart Young, whose career track record includes AC/DC; EMERSON, LAKE AND PALMER; YES; and LED ZEPPELIN. It is directed by Randy Johnson ("A Night With Janis Joplin") and choreographed by Parker Esse, with musical direction by Mark Camilleri ("Toxic Avenger", "Dr. Seuss's The Lorax").

Gramm was the voice on FOREIGNER's biggest hits, including "Feels Like The First Time" and "Cold As Ice" from the band's eponymous debut in 1977, and later songs like "Hot Blooded" and "I Want to Know What Love Is".