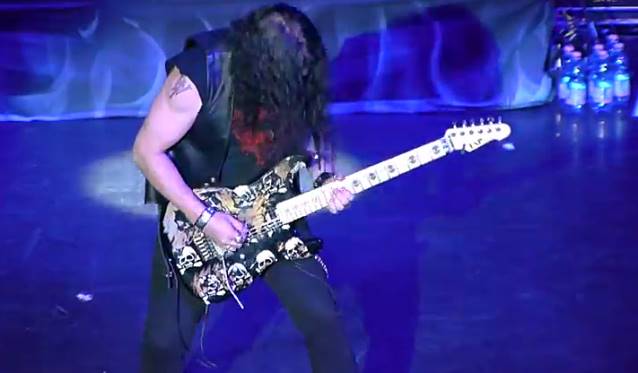 Joseph Suto of Rock Show Critique recently conducted an interview with QUEENRŸCHE guitarist Michael Wilton. A couple of excerpts from the chat follow below.

Rock Show Critique: Now that a settlement has been reached regarding the band and Geoff Tate, does it feel like the world has been lifted off your shoulders?

Michael Wilton: The situation is getting better every day. Once one has been in the trenches for the time that we have in any kind of a court battle, it can be trying. It's all about just moving forward. We're one step closer to where we want to be. It's a bit relieving, and yes, we can sleep at night.

Rock Show Critique: What does it mean going forward now for the band?

Michael Wilton: Well, full wholeheartedly, we want to rebuild the name QUEENSRŸCHE. We want to bring it back to the stature it was in the Eighties and Nineties. We want to reach out to the fans who have been wanting to hear the classics for eons of years. Now we are doing that, and we are able to bring that to the world, basically, and there are so many fans that love the first five, six albums. It's great to play those songs for them, because it means so much to them, and it also means so much to us. We're really happy to be out there and touring and bringing back the classics that fans want to hear.

Rock Show Critique: At what point do you feel the band started to go off course or make a wrong turn perhaps?

Michael Wilton: Well, the band was just firing on all cylinders up through "Empire" and part of "Promised Land". I think everybody was questioning the longevity of what they wanted to be, and what they wanted to do, and if they were happy, and if they weren't. It's a long road of ups and downs, really, the battles. Maybe, as you get older, your style of music changes a little bit. Other people wanted to stay true to what they started in the beginning. You grow as musicians and people, and sometimes it grows the other way. So it's kind of hard to pick exactly when it happened. It was at a point when we worked so hard to build up the integrity of QUEENSRŸCHE, we just got to the point where we started to get a little burned out. When Chris [DeGarmo, guitar] left, it was kind of picking up the pieces and let's see what we can do.

Rock Show Critique: We were the ones who interviewed Geoff and were surprised by how he answered on why you guys weren't playing "Queen Of The Reich" anymore. He had said it was juvenile and how he didn't want to sing it anymore. Was that part of the problem on choosing the sets, etc.?

Michael Wilton: Well, certain people grow out of songs, I guess. Being in a band, it's always kind of a battle to get certain songs into a set. That song, "Queen Of The Reich", was really our first song. That was the song Chris DeGarmo wrote and brought to the band, and we wanted to make it heavy as hell. We wanted to make it a badass song. We were really young back then. We were working at day jobs listening to the local FM rock radio station and we heard "Queen Of The Reich" play on there. We never thought that song would ever be on radio. We heard "Queen Of The Reich" on the radio and I think we lost our mind. That song took off for us all over the world. Magazines and everything. It's such a special song and it's so great that were able to bring some of those songs back that catapulted the band. I think it's still a strong song today, and we're playing it in our live show, and I think it has just as much power and passion as it did back in the early Eighties.