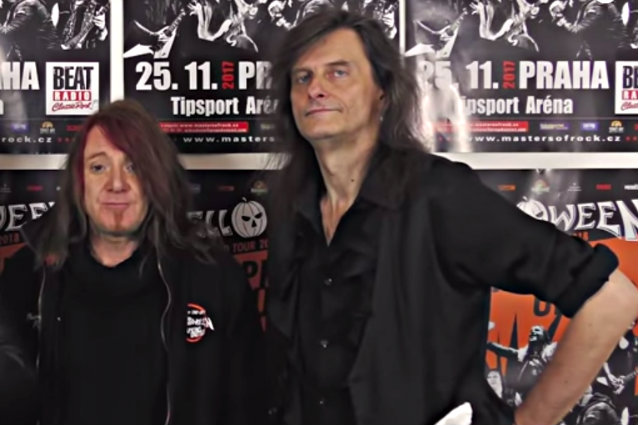 Spark TV, which is part of the Czech monthly magazine Spark, conducted an interview with guitarists Kai Hansen and Michael Weikath of German power metal legends HELLOWEEN prior to their November 25 show at Tipsport Arena in Prague, Czech Republic. The show is part of the band's "Pumpkins United" world tour which features former HELLOWEEN vocalist Michael Kiske and Hansen alongside current singer Andi Deris, guitarists Weikath and Sascha Gerstner, bassist Markus Grosskopf and drummer Dani Löble. You can watch the entire chat below. A few excerpts follow (transcribed by BLABBERMOUTH.NET).

On having Hansen and Kiske back in HELLOWEEN:

Michael: "It's okay. [Laughs] No, the thing is that on the stage we have, everybody is moving about so vividly, Sascha included. I always got to see when someone is coming [to move out of the way]. That's what happens. The rest is okay. They are having a good time."

On whether the "old spirit" of HELLOWEEN has been recaptured:

Kai: "Yeah, it's there, of course. I feel it when we stand together and play with Markus and Kiske. Yeah, it's so familiar. It's cool."

On Hansen having to learn HELLOWEEN songs he wasn't a part of, which includes material from 1991's "Pink Bubbles Go Ape" and up:

Kai: "Well, I had to re-learn old songs, that's for sure. And, I had to learn the newer stuff that I was not part of when they did it. It was a lot of work, actually, to get everything memorized. Now, I'm pretty safe already."

On who came up with the idea for the band's new single, "Pumpkins United":

Michael: "That was the management [Bottom Row]. They said 'Hey, we need a new song.' When the tour starts, we have to play something to people and whatever and the record company [Nuclear Blast] is asking 'Can you do a single?' And so we did it."

Kai: "It was a good idea, I think. It was nice to do it because it was a challenge, of course, for us too, to say 'Hey, does the old magic still work in some way?' Just as a kind of 'sign' out to the fans and say 'Hey, we're back!"

On whether HELLOWEEN will continue to compose new music with their reunited lineup:

Kai: "Let's do this tour first, that's what we said. Of course, the ideas are there, for sure. But, now we want to focus on doing this. It will go until the end of next year on and off, but I think from the middle of next year we can be more definite about making an album. We'll see."

Michael: "When we did this extra track for the tour, the 'Pumpkins United', it was out of schedule, because we were preparing for the tour. We were rehearsing. Usually we don't do track recordings during a rehearsal. You take your extra time for it. If we're ever going to record something together with everyone, it would certainly take more time than back when we were doing the 'Keeper [Of The Seven Keys]' records because there's more characters, more alpha animals involved. That's okay. It's going to work. It's going to take a lot longer. If we deliver something like that, we wouldn't want it to be half-baked in any way. There's not going to be a fucking filler track…"

On whether HELLOWEEN will release a live DVD/Blu-ray of the "Pumpkins United" tour:

Kai: "We're recording a few shows on DVD and at some point, it's going to come out."