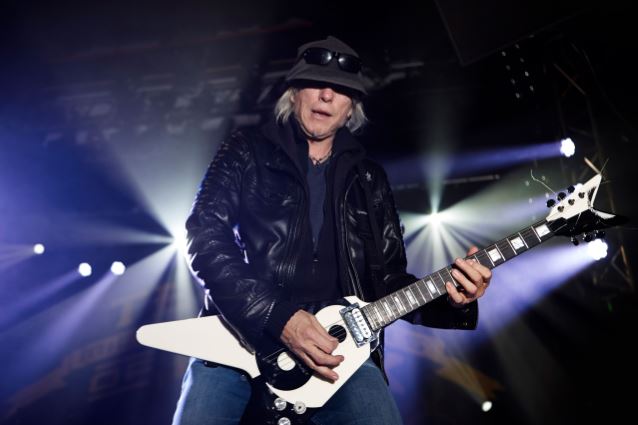 On the recent release of the 50th-anniversary deluxe editions of SCORPIONS' classic albums:

On the personal issues he has with his brother, SCORPIONS guitarist Rudolf Schenker:

"Look, you put all the pieces together. [SCORPIONS] released a 50-year box; it's not 50 years. Then they tell the people they're gonna stop playing [Editor's note: Referring to SCORPIONS' 2010 announcement that they would retire at the end of a world tour], and then all of a sudden they make a record [2015's 'Return To Forever']. It's all bullshit. They have become numb and dumb, and old and bald. It has nothing to do with music anymore.

"You know, Rudolf never knew how to write music. [On] 'Lonesome Crow', I was the only songwriter; I wrote basically all the music. And Rudolf learned everything from me that I did. I'm seven years younger than him. When I was 23, Rudolf was 30 and they hadn't even started in America. When he was 33 years old, 'Blackout' became a hit.

"When I left the SCORPIONS, I went to UFO, and basically the SCORPIONS copied everything UFO did. If you listen back to the records, you can hear very clearly that always every time we did a record…. They even hired the same art designer. Rudolf completely adopted my image and he is going overboard with it. He wants to distort reality and wants people to think he is the one who was… He wants to distort. He's playing a game — a really stupid game. If you study this whole thing, you will clearly understand what happened.

"Why would Rudolf ask me if he can play the black-and-white guitar? And why would he ask me if I would give my songwriting credit of 'Coast To Coast' to him? And then he plays those two songs on every concert for the next 35 years. Figure it out. I was generous enough to give him that, because he's my brother. But I'm finding out that they fabricated a story on what happened [during] the 'Lovedrive' period, which is a lie."

On whether he has been in contact with Rudolf directly since he has publicly voiced his displeasure over the way Rudolf has treated him:

"He's a wannabe and a trick master. I am not going to talk to anybody about this. Rudolf knows exactly what he did wrong, and only Rudolf himself can fix it for himself. My side of the street is clean; I don't have to talk to anybody. But if you are so addicted to success and if you have screwed up in such complicated ways to become a success — if you have to cheat and stuff like that, or fabricate in order to get to where you wanna get — it's nothing to do with me. I play music; I'm an artist. For me, it's all about music. SCORPIONS don't write their own songs. They have lost it completely. For the last 23 years, they're cutting out [former SCORPIONS drummer] Herman [Rarebell]. Herman and Francis [Buchholz, former SCORPIONS bassist], they are responsible with them for the '80s commercial success that they had, the political success that they had with 'Wind Of Change'; Herman and Francis were part of it. They're cutting them out wherever they can. They don't make them part of awards — nothing. They are just three greedy people. For the last 23 years, they haven't done anything that is worth talking about. All they have done is they've been milking the past, they've been milking — in the last 23 years — what they have achieved with Herman and Francis in the band. There's nothing else they have done. And maybe people are afraid talking about it. But the fact is they are fooling the people."

"I'm very disappointed in Rudolf. I'm not bitter about it. I'm not gonna poison myself. My side of the street is clear. I'm just very disappointed. And Rudolf has to figure out what to do with his life. It's on his shoulders. He knows exactly what he did. And so I stay away from him as far as I can, because I don't know what else he's got up his sleeve to justify things. He's a trick master, and he's a wannabe. And that's it. He can do whatever he wants. He can enjoy his life on every level that he wants. But I stay away from him. I'm his younger brother. He's basically bullying me and he's doing with me whatever he wants."

MICHAEL SCHENKER'S TEMPLE OF ROCK's November 19, 2015 concert at Joy Eslava in Madrid, Spain was professionally filmed and recorded for a new CD, DVD and Blu-ray, "On A Mission: Live In Madrid". The effort was released on April 27 in Japan, April 29 in Europe, and May 6 in North America via Inakustik.