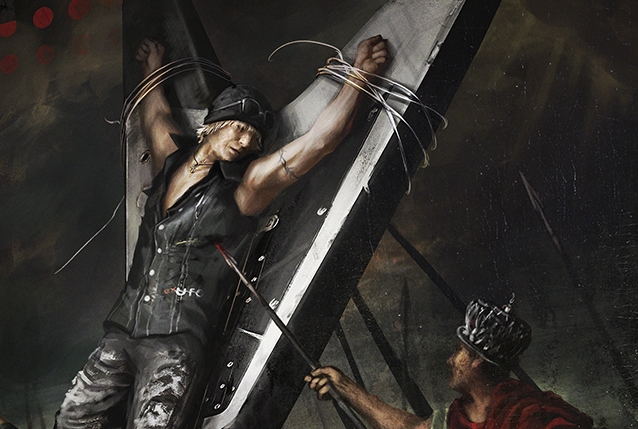 MICHAEL SCHENKER FEST's Japanese record company, Ward Records, has unveiled the cover artwork of the band's upcoming second album, "Revelation". Due on September 20, the disc, which will be made available in the rest of the world via Nuclear Blast, features an oil painting-style cover that recreates the ancient crucifixion scene. Michael Schenker, as Jesus, is crucified on a giant Flying V guitar. As the Romans raise the legendary German axeman, his bandmembers, filling in for the Apostles and dressed in full metal regalia, are being held back by the Roman warriors.

"Revelation" was produced by Michael Schenker and Michael Voss and was recorded and mixed by Voss at Kidpool Studio Greven & Kidwood Studio in Münstertal, Germany between December 2018 and March 2019.

Schenker recently announced that he will be welcoming back Simon Philipps and Bodo Schopf — who each played drums in MSG — to the MICHAEL SCHENKER FEST lineup. Simon, who played on the MSG debut album, has returned as the main drummer on the upcoming second album. Due to his schedule, he was unable to be the live drummer for the just-completed U.S. tour. This role was filled out by Bodo Schopf, who played on "Perfect Timing" and "Save Yourself". With the sudden passing of Ted McKenna, Bodo will be featured on the upcoming record but in a smaller role as he had the important job of preparing for the U.S. tour.