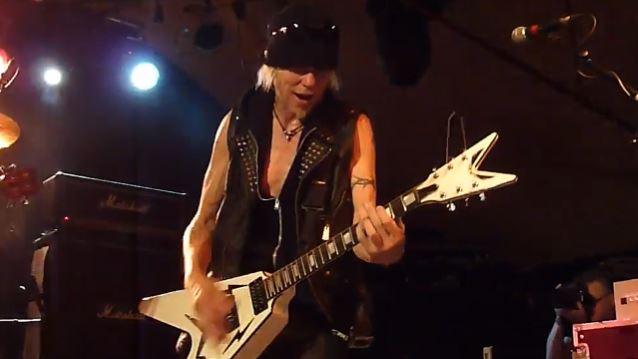 In 1972, guitarist Michael Schenker launched a stellar career with his performance on the SCORPIONS' debut album, "Lonesome Crow". Together with his brother Rudolf, Schenker helped propel the Germans' rise to fame on two successful follow-ups, "Fly To The Rainbow" (1974) and "Lovedrive" (1979). Schenker departed SCORPIONS and developed his unique style further with the legendary English act UFO on rock cornerstones like "Phenomenon", "No Heavy Petting" and "Obsession". Schenker also created his own band moniker, MICHAEL SCHENKER GROUP, as well as the MCAULEY SCHENKER GROUP.

Maximum Metal's T. Ray Verteramo conducted an interview with Schenker to talk about the new album, being on stage and the "portrait of spirit."

On the concept of TEMPLE OF ROCK:

"The TEMPLE OF ROCK concept is a mixture of the past and the now. The idea is for the TEMPLE OF ROCK / Michael Schenker platform to develop into its own entity. The first TEMPLE OF ROCK album, which was successful around the world, we didn't know what it was developing into. Step by step, we had 'Bridge The Gap'. It's like a story and it continues. By the time we make the third album, the TEMPLE OF ROCK will be capable of standing on its own feet and its own identity. We're just using the past in order to create a connection. The TEMPLE OF ROCK, once the jump start is completed, will propel by itself."

On "Spirit On A Mission":

"It's a celebration of the year of my generation of rock that started for me, that I fell in love with, and so many other people that have already passed away, like Gary Moore and Ronnie James Dio. I want to bring that incredible era in that time and put it into the foreground and celebrate it. And so, simultaneously, I'm celebrating my own progress, my own accomplishments from the 'school of life' that I have learned from. It's kind of looking back and looking at the now and combining it all."

On his spiritual expression and creating art:

"If I look back, I see my life in three stages. The beginning, the first stage of my life, was dedicated to the development as a guitarist and to my music contribution to the world, creating an entity for the '80s. And then the '80s, the 'Lovedrive' album with my brother that opened doors for America, for the SCORPIONS. So, my brother took my black and white Flying V [laughs], took over, and I withdrew into the 'school of Life.' I experimented in development more and more musically and having my own face, without being in a touring machine that was looking for fame and success from me. I was hungry for learning to play on a personal level. And then 2008, somewhere around that time, all of a sudden, I felt the urge and really enjoyed being on stage, which never happened before. So, I knew that time that I should be back in the world of rock and roll now and the TEMPLE OF ROCK is that group where it is happening."

On coming to peace with the stage:

"I once went to a metaphysical program where a millionaire couldn't understand why he couldn't enjoy his millions. Then it was found out that his money was based on hate. He brought in all his money going, 'I will show you!' He had some trouble with his uncle or something and so basically was looking into why he couldn't enjoy his millions that he had. So, then the coach was telling him, 'Well, why don't you make peace with that person and then see what will happen?' And so, he made peace with that person and he was all happy and he was able to enjoy his money. For me, it was kind of like that. When I was doing my music development and contribution in the '70s, I always said that I didn't even know what I was doing. I was just being myself, I wasn't looking for anything, it all happened by itself. Then I went through the 'school of life' and all of these things I learned, all of these things opened up for me, these understandings, etc. etc. and now they make it possible for me to enjoy all of this. It's a bit similar, you know?"

On doing homework for the school of life:

"It's like first it was all about play. I love to play and discover. I don't want anyone to teach me anything, I just want to find out for myself. Guitar playing was the same thing. The guitar was standing there. The moment I pressed the string and I put another note to it, I thought, 'Wow, this is great!' And it never stopped. On the guitar, I could always play and discover something new. Always play and discover and when I discover, I go, 'Wow! Another thing!' I get that excitement. So, at some point it's like — I don't know how the world works, but I can say and I can feel that it's all related. It's the mind, body and soul, it's all related to each other. Everything needs to get attention to develop and if it's balanced, it's probably the best way."