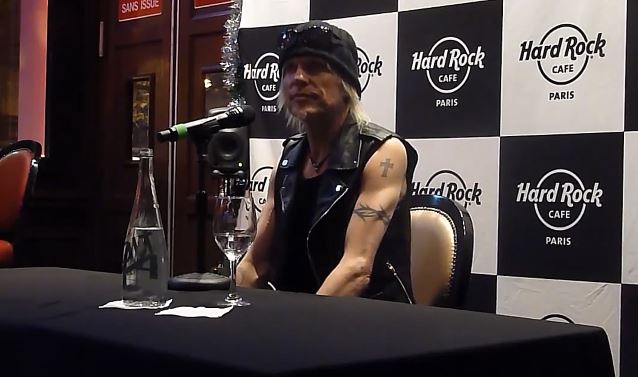 Legendary German guitarist Michael Schenker (SCORPIONS, UFO) took part in a press conference on December 1 at Hard Rock Cafe in Paris, France. You can now watch the question-and-answer session in two parts below. A couple of excerpts follow (transcribed by BLABBERMOUTH.NET).

On how he would describe the musical direction of his next MICHAEL SCHENKER'S TEMPLE OF ROCK studio album, titled "Spirit On A Mission", which is due in early 2015:

Schenker: "Basically, it's the next step up from 'Bridge The Gap', which was our first album with this lineup — with Herman [Rarebell, drums] and Francis [Buchholz, bass] and Doogie [White, vocals] and Wayne [Findlay, guitar/keyboards]. And so, on the next album, which is now the one we'll release in 2015, in March, I wanted to introduce more of the seven-string. Basically, what is actually happening is my filing system in my head has gone all the way back to when I was in late teens. So I kind of feel very, very… I have similar feelings I had then, but I also have the feelings I have now. So it's all happening together, and so somehow I kind of thought I wanted to have fast, energetic songs with melody in vocals, and lots of melody involved, but keep it going and very, very fast. And also have a couple of midtempo songs somewhere on the album, and add more of the seven-strings to it. So I was writing with Wayne — about five songs together — and he is just playing all the seven-string guitars and keyboards. And so we have a very, very interesting variety of songs. Basically, fast, energetic, energetic, energetic, and powerful, midtempo and very deep and almost with a touch of '70s but also today. It's a really combined… It's almost like all the emotions that I've ever had throughout my career combined in one."

On why he decided to call his new album "Spirit On A Mission":

Schenker: "I was asked a while ago how I want to be remembered. And I was thinking, 'Hmmm… That is an interesting question.' So I kind of looked at what I've done in the past, and I do a lot of writing from within. And I have stayed away from listening to music for over 40 years now. And so, I kind of feel what I'm doing is… I see myself as a spirit on a mission spreading the joy of music from a place of pure self expression. And so, basically, when it was time to come up with a title for that album, I, again, went, like, 'What could it be?' Because I'm writing from… The way I write and the way I present my music, etc. etc., it's… Why not 'Spirit On A Mission'? It would be a good title. So that's how it ended up that way."