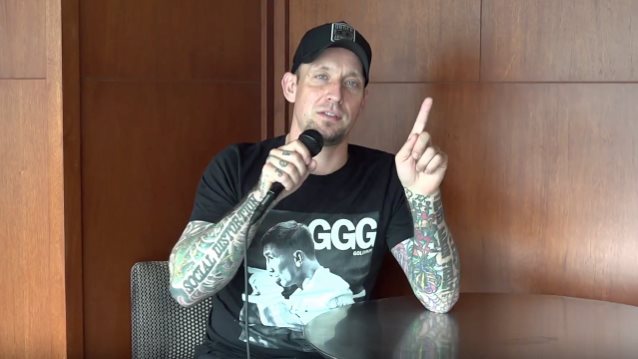 Meltdown of the WRIF radio station conducted an interview with frontman Michael Poulsen of Danish/American rock 'n' rollers VOLBEAT before the band's July 12 concert at Comerica Park in Detroit, Michigan as the support act for METALLICA. You can now watch the chat below.

Asked about guitarist Rob Caggiano's addition to VOLBEAT four and a half years ago, Michael said: "He's doing really good. We're very proud of having Rob in the band. He's a solid guitar player — a tremendously good lead guitar player and also a good rhythm guitar player. He's pretty much one of those guys who can play on any instrument, so that's always fun. But, you know, besides that, he's a really cool guy — lots of fun. He fits really good into the band. It's good to have a second guitar player where you can actually hear him on stage. He has his own signature, I have my own signature, and those two things combined are really working. And Jon [Larsen, drums] has his signature on his drums, and now we've got a new bass player [Kaspar Boye Larsen] who definitely has his own signature, and somehow it fits like a glove, and I'm very thankful for that. I think every bandmember in VOLBEAT is very important and they bring a certain element that is important for songwriting and the way we sound live."

VOLBEAT's latest single, "Black Rose", recently landed at No. 1 on Billboard's Mainstream Rock Songs airplay chart. It is the second track from last year's "Seal The Deal & Let's Boogie" album to top the list. The disc's first single, "The Devil's Bleeding Crown", reached No. 1 in May 2016, while the follow-up single, "Seal The Deal", got as high as No. 3 last December.

The "Black Rose" achievement marked the sixth time in less than five years that VOLBEAT had had a No. 1 on the Mainstream Rock Songs chart.

The only other acts who have had six or more on the chart in five years or less since its 1981 inception are VAN HALEN, THE BLACK CROWES, THREE DAYS GRACE and SHINEDOWN.