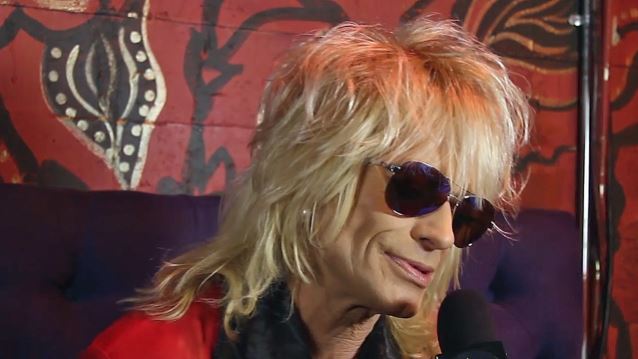 Former HANOI ROCKS frontman Michael Monroe recently spoke to Louder Noise about why the band that made his latest solo album, "Blackout States", is his best ever, what he loves and hates about touring, and how genre labels have ruined the music industry. Check out the chat below.

Speaking about the current state of the music business, Monroe said: "To me, first of all, a sense of humor is essential in this business, or in life in general; otherwise, you're gonna go nuts. You've gotta be able to take things lightly and laugh at yourself while still taking it seriously. But you can't get too serious; I mean, you're gonna go nuts.

"I think a lot of the fun is missing from the music business, 'cause music has no business in the music business; it hasn't had for a long time, hardly any. It's all about business — mostly about business — and categories. When they started calling music the different genres, like heavy metal or grunge or whatever, to me, it's always over — as a name, it's over — 'cause then it becomes like a fad."

He continued: "A lot of bands try to sound the same as the one successful band. Say NIRVANA, for example. Great band, and got huge, and then there's two hundred thousand copycat bands, who are not as good as the original, but trying to do the same thing, 'cause they figure, 'Oh, that's the formula for success and money.' And that's the wrong motivation. And record companies, of course, they encourage this, 'cause they can sell little packages: 'Oh, this is heavy metal,' and, 'This is punk,' 'Buy this,' and, 'Buy that.' So in the earlier days, in the '60s, '70s and early '80s even, I think bands had more personality and it was more fun, because we didn't think about how much this record is gonna sell or what style or what genre this will fit. It's just rock and roll, rock music, and that's why bands had more personality and it was more fun and adventurous. There was no thought about money and business. So I try to do my best to keep this thing going — this real, kind of, from the heart, honest, authentic rock and roll. Good times, and songs that have melodies and lyrics that have substance… [chuckles] not that kind of substance. The lyrics… I have to have something to say in order to get into singing a song convincingly and really be into it. It can't be just some superficial crap."

"Blackout States" was released in October 2015 via Spinefarm Records. The 13-track follow-up to 2013's "Horns And Halos" was produced by Chips Kiesbye (HELLACOPTERS, NOMADS) in Gothenburg, Sweden, and mixed by Petri Majuri in Helsinki, Finland.