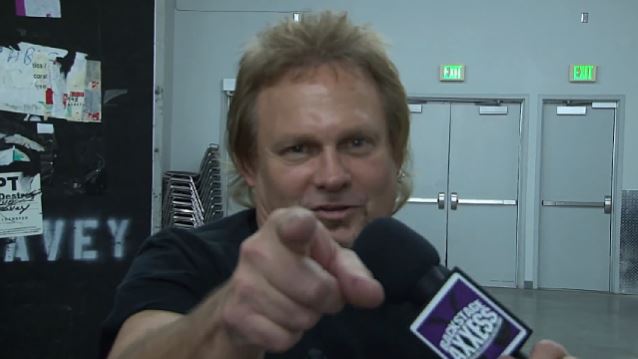 Former VAN HALEN and current CHICKENFOOT bassist Michael Anthony was interviewed on the September 3 edition of New York radio personality and VH1 Classic "That Metal Show" co-host Eddie Trunk's podcast, "Eddie Trunk Podcast". You can now listen to the chat at this location. A few excerpts follow (transcribed by BLABBERMOUTH.NET).

On what caused the rift with the Van Halen brothers that eventually led to his split with VAN HALEN:

Michael Anthony: "I think it was actually when Sammy [Hagar, former VAN HALEN and current CHICKENFOOT singer] asked me to come out and guest at some shows when he did the Hagar-[David Lee] Roth tour [in 2002]. I don't think that sat too well with some people. [Laughs] And it was really odd, because I thought that I'd be out there… Sammy asked me, 'Hey, you wanna come out and maybe jam a couple of VAN HALEN tunes?' whatever. Not do the whole tour, but just do a few shows. And I thought, 'God, that'll be great. I'll go out there and I'll wave the VH flag high. And I'll also let people know that I'm not dead, that I'm still around. And, unfortunately, Eddie [Van Halen, VAN HALEN guitarist] didn't see it that way.

"What actually happened was I hadn't really decided to do it, and Eddie and Alex [Van Halen, VAN HALEN drummer] knew about it, and Eddie called me. And I really don't wanna get into that conversation, but to put it in a nutshell, he didn't want me to be a part of that circus. But then VAN HALEN wasn't doing anything, and I was just so frustrated because I was tired of sitting home on my hands. My wife wanted me out of the house, 'cause I was driving her nuts also. [Laughs] But I just wanted to get out and play. And I thought, you know, it's, like… OK, he's not in the band, but it's, like… I don't know… I guess it was more of, like, 'You're with us or you're not. You're in or you're out.' There's no area… It's cut and dried. And what happened was [Eddie] actually kind of backed me up against the wall and he gave me an ultimatum: Are you gonna go out and you're gonna play this or whatever?' And it really upset me; he pissed me off. And I said, 'I'm gonna go out and play.' And that was kind of the end of that conversation. Then I got a call back from Alex about a half hour later saying, 'Oh, well, you know Ed. You know how Ed is. He's like that,' or whatever. And at that point, I was just, like, 'You know what?! I'm…' As much as I love those guys and the band and whatever, we had just all of a sudden been through so much, after Sammy was out of the band, and I think all of the drama with Gary [Cherone, former VAN HALEN and current EXTREME singer] and whatever, I wanted to get out and play. So I don't know if you would call that me quitting the band or just…? I was backed up against the wall. And I wanted to get out and play."

On whether he had an inkling that Eddie was grooming his son, Wolfgang Van Halen, to one day play bass for VAN HALEN:

Michael Anthony: "Well, you know what, if I would have known that was happening, when he'd be bugging us up at the studio as a little kid, I probably would have slapped him around a little bit more. [Laughs] No, you know what?! Obviously, I knew that Ed was wanting to groom him to be a musican, to play and whatever, and Wolfie's got great talent — he plays guitar, bass, drums and whatever else — but I knew that at one point that he'd like his son to play with him in some respect, but I didn't think it was gonna be like that. [Laughs] And when that whole thing went down [Wolfgang being named VAN HALEN's new bassist], I kind of found out with the rest of the public."

On whether he has had any contact with the Van Halen brothers in recent years:

Michael Anthony: "You know what?! The last time that I actually spoke to either one of 'em was the last show of our 2004 tour. And it's really sad too. I've heard from different people… I know a lot of people that work with them, like the crew guys and stuff like that. So I always hear stuff from them. You know, 'I talked to Al today,' or 'I talked to Eddie,' and I know that Al would like to still have some kind of relationship or whatever, but I think maybe because of the way Eddie felt that Al didn't wanna ruffle his feathers by calling me or whatever."

On whether he has listened to the most recent VAN HALEN album, "A Different Kind Of Truth", featuring Wolfgang Van Halen on bass:

Michael Anthony: "I've heard two or three of the songs; I haven't actually sat down and listened to the whole thing. You know, pretty much a lot of the stuff that I listened to is stuff that I remember us all recording as demos years ago. And they're just kind of bent a little which way, or whatever, and Dave came up with some different lyrics. But a lot of it, what I heard, was just really reminiscent of some of the songs [we wrote and demoed years ago]. In fact, I've still got some of those demo tapes."

On the "A Journey Through The History Of Rock" tour featuring Hagar, Anthony, Jason Bonham on drums and Vic Johnson on guitar:

Michael Anthony: "This kind of stems out of nothing happening, really, in the CHICKENFOOT camp right now. Chad [Smith, CHICKENFOOT and RED HOT CHILI PEPPERS drummer] has been with the CHILI PEPPERS, 'cause they pretty much immediately got off the road and went in and started writing again, and so Chad had to be a part of that. And even though I don't feel CHICKENFOOT's dead, the time right now is not right where everbody's schedules are gelling together to be able to do something. And this thing with Jason Bonham, it all stemmed out, at the beginning of this year, Sammy played a thing called the [South Beach Wine & Food Festival] in Miami Beach. It's this huge festival that's made up of little things that go on around it, and Sammy and his good buddy, Emeril Lagasse, put together a thing where they were gonna cook and Sammy's rum, or whatever, and Sammy wanted to play some songs, but he didn't want his band, the WABOS, to do it, so he called me up and asked me if I'd be interested in just going and jamming some stuff. And he said he was gonna call Jason, because Jason lives about an hour and a half from where this whole thing was happening. I said, 'Yeah. Sure. That sounds like fun.' So we put some songs together, threw a couple of [LED ZEPPELIN] songs in there too. No rehearsal or anything. Sammy grabbed his guitarist Vic Johnson. And we flew to Miami and we did this and we had so much fun doing it and it sounded so great. We did it right on the beach, and there was probably about four thousand people at this event that we played at. And, man, the response was so great, we were, like, 'Wow! This is really cool.' And so since nothing was happening with CHICKENFOOT this summer, Sammy called me with an idea. He said, 'Why don't we put this thing together and just go out and do some shows and have some fun and see what happens?' And, my Gosh, we went out, we did a couple of festivals this past month in Canada, and we did a couple of outdoor things outside of New York — everything from small casino shows to a couple of bigger shows — and the response has been great, the reviews are great, and a lot of these guys don't even review bands like what we're doing right now, and we're getting reviews on this thing, and it's great. And we're getting two, sometimes three, solid encores every time we play [with] this thing."