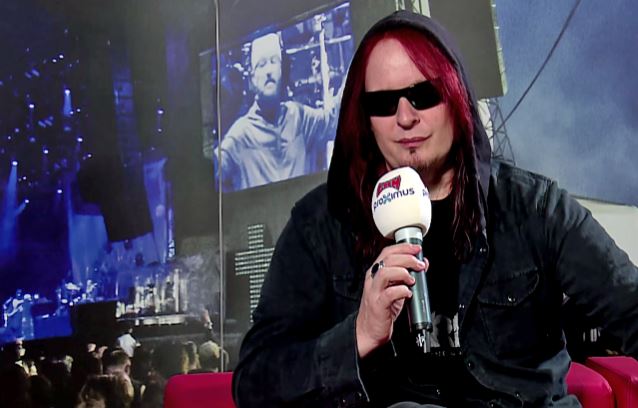 ARCH ENEMY guitarist Michael Amott was interviewed at this year's edition of the Graspop Metal Meeting, which was held last month in Dessel, Belgium. You can now watch the chat below. A couple of excerpts follow (transcribed by BLABBERMOUTH.NET).

On the departure of singer Angela Gossow and addition of Alissa White-Gluz prior to the recording of 2014's "War Eternal" album:

"It all happened very quickly, actually. The initial feeling was also that this is gonna be very difficult — to replace an iconic front figure in a band, who is well established, and so forth. But Alissa came into the picture very quickly. I mean, at the end of the day, I had two choices: to stop the band and say, 'That was a great run,' and just finish it; or try something… I'd already written some new songs… try something with the new lineup. And we just did that, and it's worked out very, very well for us, so we're very happy."

On whether ARCH ENEMY was concerned about fans possibly not embracing the band's new lineup:

"I believe that it's in nature of being a fan that you want… you fall in love with a band, or an artist, at one point in your life and you want them to stay exactly the same for the rest of… Never change the sound, how they look, or anything. And, obviously, this was a big change, but I think it was a successful one. There are a lot of examples when it hasn't worked out so well for bands when they changed their singer, but this is one of those rare cases where, actually, the band has kind of gone up instead of staying the same or going down."

On ARCH ENEMY's plans for the immediate future:

"We're touring up to the end of the year. We have a big tour; we're going to America [this summer]. And then we're already booking stuff in 2016 as well. But, you know, at some point next year, we're gonna start thinking about writing new music properly. We already have a few ideas floating around, but nothing really concrete. It's hard to focus on that when you're just going around the world like we're doing now."