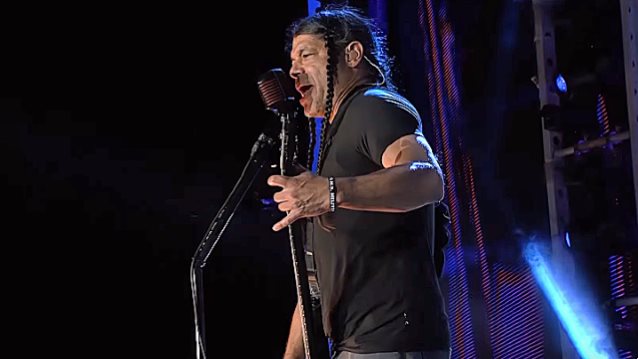 METALLICA bassist Robert Trujillo was recently interviewed by veteran radio personality Jenn Marino, who in 2014 joined MÖTLEY CRÜE and SIXX:A.M. bassist Nikki Sixx as co-host of "Sixx Sense With Nikki Sixx" and "The Side Show Countdown With Nikki Sixx". You can now listen to the chat below. A couple of excerpts follow (transcribed by BLABBERMOUTH.NET).

Robert: "'Hardwired', to me, is a combination of us becoming better as a band and also having a great time with our producer. Greg Fidelman has everything to do with how this album sounds and making us play better. I know, as a bass player, I've been very fortunate in my career to play with my heroes and to play different styles, but on this album, it was really about the art of simplicity but also being heavy in finding rhythms that counterbalance to James's [Hetfield, guitar/vocals] riffs and Lars's [Ulrich, drums] drum beats. And that's exciting. It's fun to try new things with your producer and to get that sound and just to really have a good time in the studio. So 'Hardwired' is a combination of growing, and maybe you could even say it's the second step to [2008's] 'Death Magnetic', 'cause 'Death Magnetic' was sort of the first journey, for me, creatively, that I took with METALLICA. But it also was Greg Fidelman's first step with the band as well, and now he's the producer. Rick Rubin produced 'Death Magnetic', which was great, and it was important and it needed to happen. And now here we are. And I feel like we're still moving forward. Creatively, there's great energy and it shows in this album and how it's being received. I feel it's a good time to be in the band."

On a possible follow-up to "Hardwired… To Self-Destruct":

Robert: "Me personally, I get excited about creativity, and I feel personally, and I've heard James say it too, that we still have yet to make our best METALLICA record together. And that's a good thing. I mean, we're proud of this, and I'm only thinking, well, if you're proud of this, there's more to come, man. We've got more in us, and I feel like, in a way, there's sort of a new beginning that's happening here. Sometimes it's rough — you go through these times and personalities or whatever, and you deal with that stuff, and like any band or any family or any situation [or] any team, we have gone through that in the last… just even couple of years. But, again, you grow and you get through it, and when you get through it, hopefully you're making kick-ass music and you're playing better. I feel like even with these small shows we've been doing — we played Webster Hall in New York and we played the Opera House in Toronto, we played Vans skate park, House Of Vans, in London — and it's just fun. But what's been great about it is we've been reconnecting on these small stages, and we've realized that we really like playing together and we really enjoy each other's… It's, like, 'Hey, there you are!' You're not on some big aircraft-carrier stage [where] you might see each other every ten minutes. But it's been cool. And I don't know. You can't always predict this stuff — it just sort of grows and happens, and it feels good right now."

The North American leg of METALLICA's "WorldWired" trek will hit stadiums in sixteen more cities before ending in mid-August.

The next stop on the tour is Chicago, Illinois on June 18.