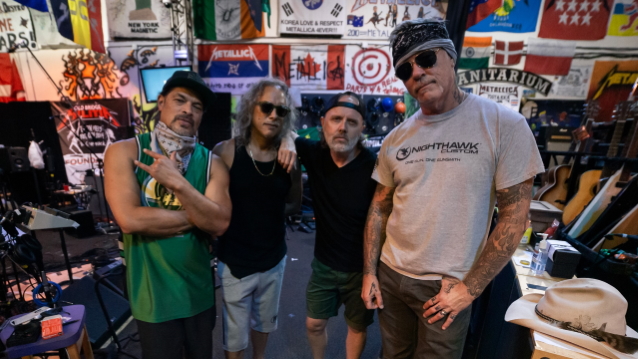 Robert Trujillo has told The Oakland Press that he and his METALLICA bandmates are looking forward to doing more stuff together, just days after they broadcast a show to hundreds of drive-in and outdoor theaters across the U.S. and Canada, as part of the "Encore Drive-In Nights" series.

"Obviously these are crazy times, and it takes a lot to take that first step, and I feel like we've done that," the bassist said. "We have some ideas about how we want to pursue making music together. We're going to put something together and it's going to be exciting musically, and maybe there'll be another performance or two — not exactly sure when or how or what, but there are things in the works.

"We'll get through this stuff now and start figuring out what's our next step towards creativity," he added. "[The possibilities] go on and on and on. That's kind of where we're at."

METALLICA's drive-in concert was shot specially for the "Encore Drive-In Nights" series and was subsequently edited and mixed by the band's award-winning production team to the highest standards possible.

Earlier this month, METALLICA took part in an interview and short performance on "The Howard Stern Show".