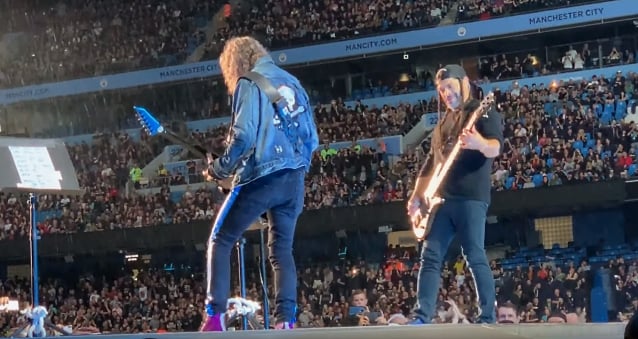 Robert Trujillo and Kirk Hammett played a cover version of THE STONE ROSES' "I Wanna Be Adored" during METALLICA's June 18 concert at Etihad Stadium in Manchester, England. Fan-filmed video footage of the performance can be seen below.

"I Wanna Be Adored" was part of the fun and unusual feature METALLICA added to its shows on the band's recent tours: at each stop, Hammett and Trujillo have been covering songs from some of their musical heroes — often choosing songs that are far removed from the band's traditional metal sound. The "doodles," as the band refers to them in their setlists, have been showing up right before Trujillo's solo on "(Anesthesia) Pulling Teeth". The songs are pared-down interpretations — just bass and guitar and sometimes Trujillo singing in front of music stands.

In other news, METALLICA made a substantial donation to a homeless charity in Manchester ahead of the band's show in the city.

Before the sold-out performance, the quartet gifted just over $50,000 to Coffee4Craig, an organization that works to provide shelter, food and resources for the homeless. The charity's head, Hendrix Lancaster, said that the large sum will fund the six-year-old foundation's work for the next 12 months.

METALLICA's own foundation, All Within My Hands, tweeted an image of the band handing over a giant check, along with the message: "Thank you to all the fans attending #MetInManchester tonight for joining METALLICA in supporting Coffee4Craig, as they support vulnerable people in their community."

Last year, METALLICA used All Within My Hands to donate $100,000 to help the California wildfire relief efforts. The foundation made a $50,000 donation to both the North Valley Community Foundation and the Los Angeles Fire Department Foundation.

The band has also donated to food banks and other charities in many of the cities on its ongoing "WorldWired" tour itinerary.

"WorldWired" has played more than 130 shows across the world since its 2016 launch.