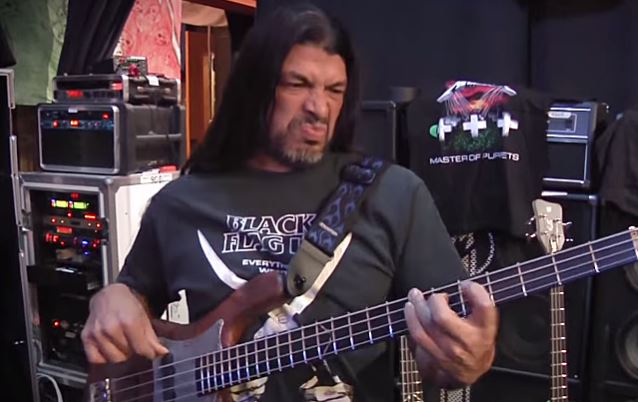 During a recent appearance on "Talk Is Jericho", the podcast of Chris Jericho, the world champion pro wrestler, actor, New York Times best-selling author and lead vocalist of the metal band FOZZY, Robert Trujillo spoke about his 2003 audition to replace METALLICA bassist Jason Newsted, as captured in the 2004 band documentary "Some Kind Of Monster".

"I knew some of the METALLICA songs just from… Every bass player in heavy metal music knows some METALLICA, and ['Battery'] was a song I knew fairly well," Trujillo said. "But once you get there, they want you to play… 'Hey, play 'Sad But True'.' Or 'Play this' or 'that,' and you start kind of improvising through some of that. But I think what was important for them was the feel and also the person. You know what I mean?! So the feel, they were impressed with the feel. [My playing with] fingers [was], I guess, more important to James [Hetfield, METALLICA frontman]."

He continued: "Fingers, there's a certain attack and a feel and a dynamic to the sound and the flow of a finger player. But then I play with a pick, too, sometimes. I don't play METALLICA with a pick… I'm not a good pick player, you know what I mean!? But the good thing is, it's sort of trial by error. When I first joined the band, there was so much galloping — like 'Battery''s got a lot of galloping — so right away I had to sort of revamp and retool my technique. So immediately I had a lot of adjustments that I needed to make, which is good, because I always like a challenge."

Asked about the differences in the way he had to approach the material originally recorded by Newsted compared to the songs that were laid down by METALLICA's late bassist Cliff Burton, Trujillo said: "A lot of the stuff that Bob Rock produced was a bit more… Obviously, groove is very, very important on those songs, like 'Black Album' songs. But then just really keeping it fairly simple in that style. With Cliff, we're talking about a little bit more aggro, but tight. So they are different styles. I still play with my fingers, even on the 'Black Album' material. But the great thing about… What I can say I'm pretty proud of being in METALLICA these years is being able to play, like, the 'Black Album' in its entirety — songs that were never played live: 'The Struggle Within'. There was about three songs on that album [that had never been played live]. And even 'Orion'… We play 'Orion' a lot now; it's kind of an active song in the set. And that was a song that hadn't really been played years before. And 'Dyers Eve', off the '…And Justice For All' album, that was a song that had never been played live as well. So the fact that, here we were, age 50, and we're attacking songs that hadn't been attacked… And in a lot of ways, I feel that that challenges us, and it actually makes this unit a better band."

METALLICA released a 10th anniversary two-disc Blu-ray edition of t"Metallica: Some Kind Of Monster" on November 24, 2014. The new edition of the film was made available digitally and via VOD for the first time. It also contains a new bonus feature, "Metallica: This Monster Lives", a 25-minute follow-up segment filmed at the 2013 Toronto International Film Festival during the premiere of the band's second film, "Metallica Through The Never".

The segment features interview footage with the band and "Some Kind Of Monster" co-directors Joe Berlinger and Bruce Sinofsky in which they all look back at the decade since the release of the film.