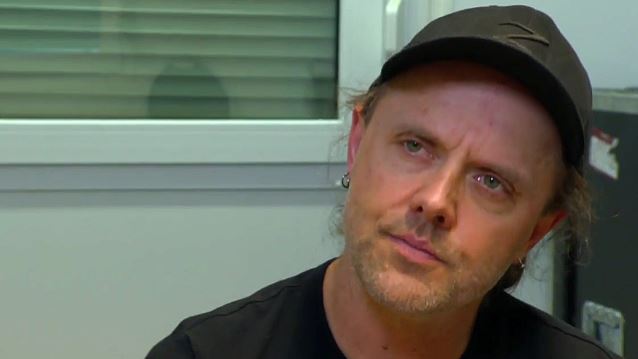 METALLICA drummer Lars Ulrich is the featured speaker in the latest installment of "Sommar i P1", Swedish radio channel P1's daily one-man show which has aired every summer since 1959. You can now listen to the program at SverigesRadio.com. A few excerpts follow (transcribed by BLABBERMOUTH.NET).

On the role "anger" plays in METALLICA's songwriting process:

Lars: "A lot of people ask me about the presence of anger in my creative process. I grew up in a very culturally rich environment. A lot of the people that play harder rock today grew up in broken homes with very problematic and even rebellious relationships with their parents and their surroundings. I never had one of those, and so most of what fueled me towards harder rock was more the energy, the sense of belonging to something greater. Anger and hostility was never a driving force in my relationship in the magnetism that pulled me into hard rock. I will say that being Danish, I've always had, I think, a fairly easy relationship with being contrary. I think a lot of Danish people are quite contrarian and like to challenge things and like to… If somebody says, 'Let's go left,' then Danish people will pull off and just go, 'Let's go right.' I certainly have a bit of a contrarian kind of attitude in me that, I think, comes certainly significantly from being Danish, and I think METALLICA has always enjoyed floating around in our own little bubble, being outsiders, living in our own world, being contrary and a little bit opposite of what everybody else embraces. We've never been a big part of a movement, of a fad, of a wave. We never particularly felt like we fit into anything, and METALLICA has always, I think, enjoyed an element of contrary energy."

On staying down to earth despite METALLICA's massive commercial success:

Lars: "We have been doing what we have been for a better part of 35 years, and obviously when you do anything for 35 years, you have ups and downs. I would like to think that we have dealt with the success that we've been fortunate enough to have come our way in a fairly level-headed way. The bands that inspired us and the bands that made us wanna be in a band ourselves — like the MOTÖRHEADs and the DIAMOND HEADs and the IRON MAIDENs of the world — were all bands that were very level-headed and had their feet firmly planted on the ground, so we've always tried to have an open door with our fans and be as accessible as possible, given whatever dynamics and circumstances were happening at the time."

On "Some Kind of Monster", the 2003 movie about the hardships, struggles and frustrations METALLICA experienced while creating the "St. Anger" album:

Lars: "'Some Kind Of Monster' was a film, obviously, depicting a crazy time in METALLICA's life and METALLICA's career. It was the first time that we had ever really slowed down long enough to have real conversations with each other. I think after almost twenty years of making music together, touring the world together and engaging in everything that you engage in together. And you've gotta remember — when you're young, you do everything together; you live and breathe together 24 hours a day, and you're sleeping in the same spaces and eating and traveling and everything, even things that you know I'm gonna say next. So it's all there. And then you grow older, but along the way — at least in our case — we never talked about how we were doing, how we were feeling, what we were thinking; we never checked in with each other. And, for some reason, there was a lot of energies that built up and maybe some resentments and some things that weren't said and some things that weren't ironed out. At the tail end of the 1990s, things… We put four records out in four years, we took a little bit of a break, and when we got back together again to continue working on the next record, there was a different energy in the band. All of a sudden, Jason Newsted [bass] decided that he didn't wanna be there anymore, James Hetfield [guitar/vocals] had some issues that he had to deal with, and there was a lot of stuff simmering. And so our managers suggested that we meet with a performance coach who had worked with some of our peers and they had gotten to know, and he came in and started talking to us about what was going on with the band and how we were doing and what we were feeling. And this coincided with the presence of a movie crew that we had hired to document the making of the next METALLICA record. So there was a confluence of a lot of different energies. And all of a sudden, a bunch of crazy shit happened, and those damn cameras were there filming the first nuclear meltdown in the METALLICA camp. And out came this movie. There was a perverse beauty in being that open and sharing it. Especially in the music world, there were a lot of people that thought that there was way too much stuff there that they shouldn't have seen, but the movie kind of a became a bit of a phenomenon itself, especially in the film world, 'cause it was a movie about relationships. It wasn't really a movie about a rock and roll band; it was a movie about people trying to figure some relationships out and who they were and so on. It's a long time ago — it's 14 or 15 years ago — and things are very different nowadays within the internal dynamics of METALLICA. But I'm proud of the fact that we put the movie out. I'm proud of the fact that we had the balls to share the movie and that we were comfortable being that transparent."

Lars: "Success is a funny thing, because what does it even mean? You know, fame, success… these are all, in some ways, peculiar things to talk about. I feel like a big part of the success that we've had we've kind of used to have creative freedom. We've always been very curious as people, we've always been afraid of repetition, and we've always pushed ourselves hard to try to continue to evolve and embellish and change things up, and we've always, I think, had a very open and frank dialogue with our fans about, 'If you're gonna be on this journey with us, then prepare yourself for a ride that's gonna have many different sides and feels to it.' We have used our success to force creative autonomy. We've never really had to depend on money from record companies and so on and so forth, so we've had a high level of freedom to go where we wanted and do what we wanted, because we've never owed, or we've rarely owed anybody anything. So when I think of success, what I really correlate that to is freedom and autonomy and kind of going where you want. And we've certainly done a lot of different things over the years, most of it, I would like to think, with the purest of intent. Some of it's been good, some of it's been not so good, but it's always been with the right idea in mind. It's been free of being too contrived or pre-planned destination points. METALLICA has always enjoyed jumping off a cliff and then, on our way down, trying to figure out where we're gonna land, how we're gonna land and feel safe in [knowing] that we will land some place where we're gonna be okay. So, to me, the journey has always been the most interesting part rather than the result."

METALLICA is putting the finishing touches on its long-awaited follow-up to 2008's "Death Magnetic" album for a tentative fall release.