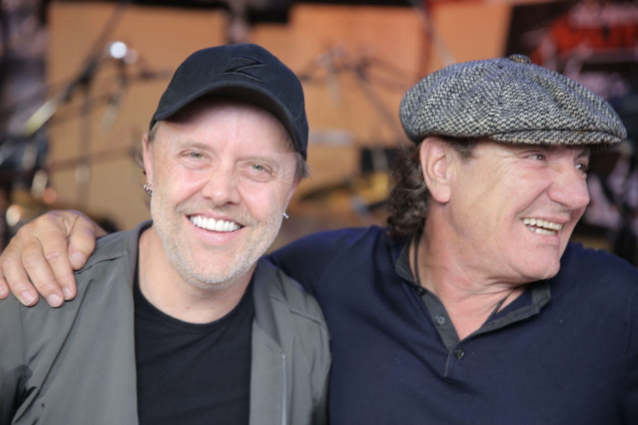 In the exclusive first-look below, Ulrich recalls going on tour with AC/DC in the early '90s as METALLICA was starting to take the world by storm. AC/DC was a primary influence not only for the band, but for Ulrich himself, and the chance to watch his heroes in action left a profound impact on him.

"You've gotta remember, our musical roots were in [AC/DC], DEEP PURPLE, LED ZEPPELIN," Ulrich explains. "Playing with you guys on that run in 1991, which was the last time we really sort of supported anybody, we were in heaven getting a chance to be close to you guys and watch you every night for six weeks." Check it out below.

"Brian Johnson's A Life On The Road" airs every Sunday at 9:00 p.m. ET / 6 p.m. PT, only on AXS TV. Next week, Brian sits down with PINK FLOYD percussionist Nick Mason on October 20.

In a 2017 interview with the Baltimore radio station 98 Rock, Ulrich said that he would pick AC/DC's Phil Rudd to take over behind the kit for METALLICA if he was no longer able to play drums in the band. "He's been probably my main, biggest source of inspiration when we did the turn-away from the super-progressive stuff, the crazy stuff after 'Justice', when we got into the 'black album' and the 'Load' stuff, when it got a little more about the bounce and the riffs and the feel and the groove and all that," Lars said. "Phil Rudd, he's the top of that pyramid. Hearing Phil Rudd play behind James [Hetfield], that'd be pretty cool."