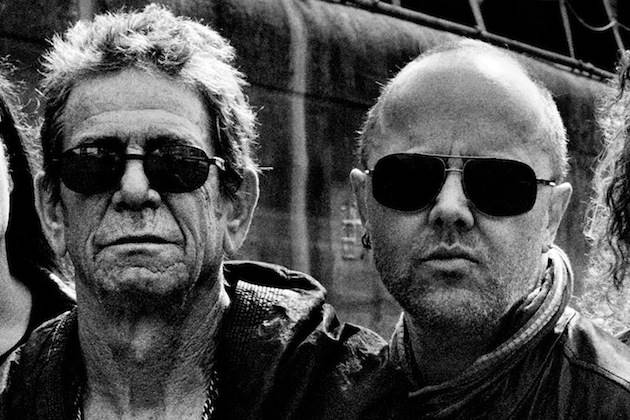 METALLICA drummer Lars Ulrich has paid his respects to Lou Reed, the singer, songwriter and former THE VELVET UNDERGROUND frontman who died on Sunday (October 27) at the age of 71 from complications due to liver disease. Although Reed got a liver transplant last spring, the affliction could not be beaten despite continued treatment and Reed returned to Long Island to spend his final days at home.

METALLICA collaborated with Reed in 2011 on the album "Lulu", which was a commercial failure and widely panned by fans and critics.

Nevertheless, the disc was the last recorded work released by Reed, and the members of METALLICA may have been the last musicians to work with him in the studio.

Speaking to Ben Beaumont-Thomas of The Guardian, Ulrich said: "[Reed and METALLICA] had communicated about a month ago when we were going to come by New York to play the Apollo, and Lou was going to come to the show and hang out. He didn't make it because his health took a turn for the worse, so I knew things were not good, but I didn't know it was that serious. So I was half shocked and half crushed — shocked that he went so quickly and crushed over the loss.

"We were both outsiders, we both never felt comfortable going down the same path that everyone else was doing. METALLICA's always been autonomous, and Lou Reed is the godfather of being an outsider, being autonomous, marching to his own drum, making every project different from the previous one and never feeling like he had a responsibility to anybody other than himself. We shared kinship over that. And we brought him something that he didn't have, or maybe hadn't experienced so much, which in his own words were 'energy' and 'weight' and 'size' and whatever it is that happens when we start playing. He was so into what we brought him. And, of course, he brought us this incredible piece of work that he had already written, 'Lulu', and about her escapades and sexual endeavours. We brought something to each other, and we shared a common lack of ability to fit in with our surroundings.

"I'll always remember his fragility. I felt in some way that I connected to his fragility, and identified with it. He was very open, he would say, 'Lars, I love you,' and text me a heart. It was so beautiful. The way he was so unfiltered is what I will remember most, and his fragility, and how I've never met anybody who, no matter what he was saying, he was always speaking his truth. It never felt cerebral, it always felt like it came from some other place somewhere. When people talk, it comes from their brain; I don't know where his words came from, but they came from somewhere else. Emotional, physical, everything — it really resonated with me. I wanted to give him strength, and I think METALLICA gave him strength. His being was so beautiful once that guard went away, and it was childlike."

Read Ulrich's entire tribute to Reed at The Guardian.