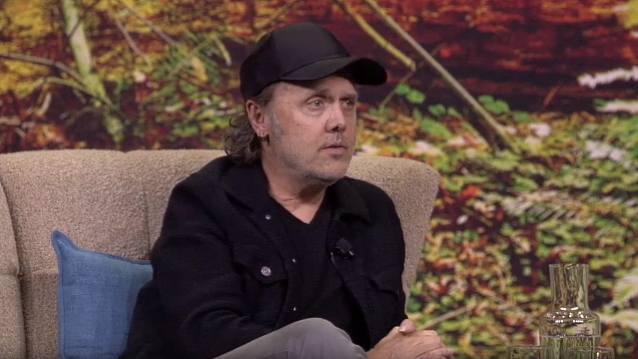 On November 21, METALLICA drummer Lars Ulrich and world-renowned cellist Yo-Yo Ma took part in a "fireside chat" during Salesforce's annual Dreamforce conference in San Francisco about how they use the power of their music as a platform for change. You can watch the entire 50-minute discussion below.

Speaking about how METALLICA has taken what could be construed a narrow category of music and invited more people and broadened its audience and its reach, Ulrich said: "For me, for us, it's very simple. To me, there's only two kinds of music — great music, and less great music. Beyond that, you don't need to break it down into any categories, as far as I'm concerned. I think the press and maybe the music business benefits from categorizing things, but we've never felt the need to really go beyond that. Yes, we understand that we fit into the harder rock category, but we're just not comfortable being… that everything has to be so isolated in these subdivisions.

"When I was five years old, the earliest sounds I remember coming out of my dad's music room was John Coltrane, Dexter Gordon, Miles Davis, THE DOORS, Jimi Hendrix, THE ROLLING STONES, Ornette Coleman — the list goes on," he continued. "All these things — Bob Marley… I grew up in a very diverse musical household. And so I love that, and I love being inspired by all these different things and bringing that to my day job. And I certainly encourage people to broaden their horizons as much has possible.

"There's a whole separate conservation here about… There's certain conservative traits that go through the world of hard rock that we've tried our best to fight against. And certainly one thing is to be open-minded and to not get stuck in these narrow views of music or the world or whatever. So, as far as I'm concerned, as far as METALLICA is concerned, we like to look in broad strokes. I would even say, when people talk to me about, 'What do you think of this?' or 'What do you think of that?' or 'What inspires you?' I actually go outside of music.

"Those of you who know me know that my biggest passion in the world of art is film," Ulrich added. "And I think film as a medium still has a lot of — there's a lot of exciting things that are happening, a lot of barriers that are still being broken down.

"When I see a great movie — I saw a movie a couple of days ago called 'Honey Boy'. I saw a movie two days ago, a preview of a movie that I highly recommend, called 'Uncut Gems', with Adam Sandler, that's coming out in the next month. When you see movies at that level — they're rare — but when you see movies like that, it makes me wanna go back to METALLICA and create: write songs [and] play music. So whether it's painting or whether it's sculpture or whether it's film or whether it's literature, I find just as much inspiration outside the world of just music or even just hard rock. So, to me, it's just about curiosity, broadening your strokes, broadening your horizons and not thinking in too limited a scope."

A film of the concerts, called "S&M²", arrived in theaters worldwide in October.