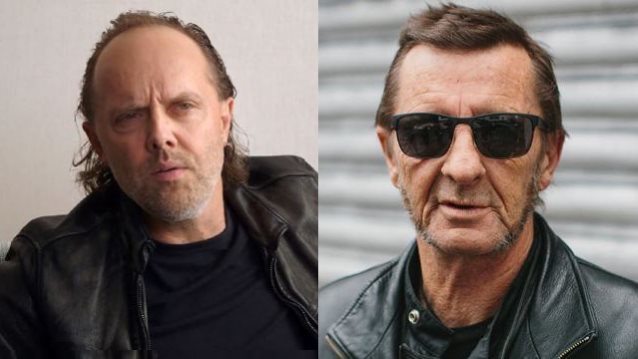 In a brand new interview with Forbes, Lars Ulrich was asked which drummer he would hypothetically want to play in METALLICA while he watched. "That would probably have to be Phil Rudd from AC/DC," Lars responded. "If I could hear Phil Rudd play 'Enter Sandman' or something like that in his pocket, his groove, that would be awesome."

Ulrich's latest comments echo those he made back in May when he told Baltimore radio station 98 Rock that he would pick Rudd to take over behind the kit for METALLICA if he was no longer able to play drums in the band. "He's been probably my main, biggest source of inspiration when we did the turn-away from the super-progressive stuff, the crazy stuff after 'Justice', when we got into the 'black album' and the 'Load' stuff, when it got a little more about the bounce and the riffs and the feel and the groove and all that," Lars said. "Phil Rudd, he's the top of that pyramid. Hearing Phil Rudd play behind James [Hetfield], that'd be pretty cool."

Asked by 98 Rock if he could imagine a scenario where one member of METALLICA could no longer go on and the other three had to decide whether to continue with a replacement, Ulrich answered: "I think a lot of it would have to be under what the circumstances were… If somebody leaves, it's hard for me to imagine that we would not go, 'You know, we've had a great ride for thirty-five years.' But if somebody encourages the other three guys to continue, or there's an injury... I'm just saying you never know what the circumstances are."

METALLICA has had relatively few personnel changes in its 36-year career. The band replaced guitarist Dave Mustaine and bassist Ron McGovney with Kirk Hammett and Cliff Burton in its early days, while Burton's death in 1986 led to the hiring of Jason Newsted.

That lineup remained stable until Newsted's exit in 2001, but with the addition of Robert Trujillo in 2003 the band roster has been the same for fourteen years and counting.

As for Ulrich's hand-picked replacement, Rudd was ousted from AC/DC in late 2014 after being arrested in his adopted home of New Zealand on charges of drug possession and threatening to kill.

He has since gone through therapy and rehab and has expressed interest in returning to AC/DC, but has been recently touring behind his solo debut, "Head Job".

The North American leg of METALLICA's "WorldWired" trek will hit stadiums in nine more cities before ending in mid-August.

The next stop on the tour is Montreal, Quebec, Canada on Wednesday, July 19.