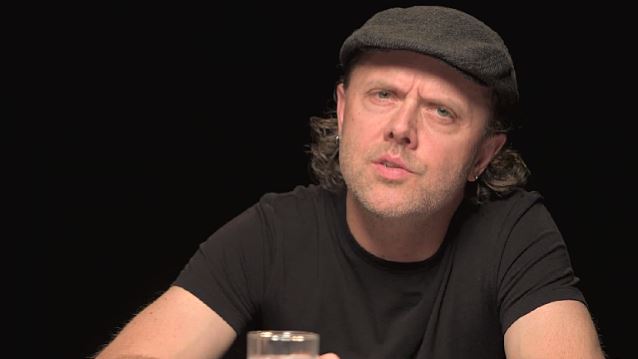 On September 9, METALLICA drummer Lars Ulrich talked about music and branding at the Billboard studio in New York City. Joining Ulrich for a discussion of the ever-shifting rules of music and brands were Steve Pamon, JPMorgan Chase head of sports and entertainment marketing; Crush Management's Jonathan Daniel, who has overseen the careers of SIA, FALL OUT BOY and TRAIN; Atlantic Records' Camille Hackney, who has put together brand deals for Janelle Monae (Cover Girl, Sonos, American Express), Hunter Hayes (Pepsi, ConAgra Foods) and Charli XCX (Samsung, JBL); Patience Ramsey, of Translation, the ad agency that helped created the Budweiser Made In America festival; and Jennifer Frommer, who has helped assemble seven-figure deals with T-Mobile and MasterCard at EDM conglomerate SFX. You can watch video footage of the discussion in four parts below.

On METALLICA becoming the first major act to perform in Antarctica, with a little help from Coke Zero:

Ulrich: "One thing METALLICA loves to do, we love to go to unexplored places. We were in China last year for the first time. Got a chance to go to Malaysia last year for the first time. There are still frontiers that maybe five, 10 years ago there was no infrastructure to support the type of thing we do. When someone said, 'Antarctica' — you have to look at Coke Zero and you may feel OK about getting in bed with that. So we did this thing for Coke Zero that helped facilitate that particular [event] in Antarctica, but it was primarily a campaign for Latin America. That doesn't mean that we would get in bed with Coke Zero in the United States. You have to look at what the scenario is as a one-off."

On whether U2's deal with Apple — estimated at $100 million and considered the biggest brand deal in music history — worked:

Ulrich: "I think U2 are the coolest… it's 2014 and anybody who thinks outside the box, or attempts in any way, shape or form, to break the status quo in the world of music, should be applauded. To me, it's not about whether the endeavor is a success or not. It's the fact that they have the balls and the foresight to throw something this radical at all of us. We are embedded in our creative process right now and this type of attempt to reinvent the wheel inspires me immensely."