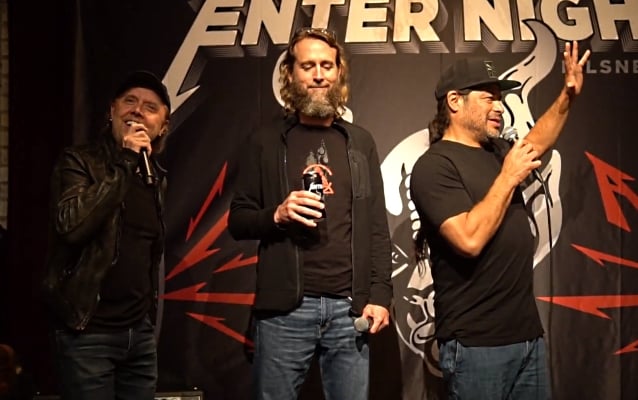 METALLICA celebrated the launch of its beer brand, Enter Night, on January 14 at an invite-only party in West Hollywood, California. Drummer Lars Ulrich and bassist Robert Trujillo took to the stage at the event to discuss their collaboration with Stone Brewing on what has been described as "a hoppy pilsner played through a distortion pedal." The beer first appeared on the band's fall 2018 tour dates and will gain full U.S. distribution in the first quarter of 2019. A spring rollout will include Europe, Australia, China and elsewhere.

Enter Night Pilsner is the outcome of a genuine creative spark between two entities that grew to become international forces of nature in their respective worlds, yet came from the fringes. An intensity of vision combined with a shared middle finger to the status quo makes Enter Night Pilsner a chorus of collaboration worth celebrating. The members of METALLICA and the leadership of Stone participated at every step alongside their talented brewing team. From METALLICA's Bay Area HQ and the brewery HQ in San Diego, to many beers backstage at shows, the spirit of collaboration was powerful. Ulrich and Stone co-founder Greg Koch even enjoyed multiple occasions at Lars's home "discussing" (industry speak for "drinking") beers. After all, there was only one chance to get this right, and anything less than an incredible result was not an option.

"The amount of ideals and outlooks that METALLICA and Stone Brewing share are endless," says Lars. "I'm always blown away about how similar our paths forward have been. Our view of the worlds that we each inhabit, of creativity and process, and sense of place in relation to our peers and 'The Man' are almost identical. This collaboration is beyond effortless and pure, and we can't wait to share this incredible beverage with everyone out there."

"I remember seeing METALLICA on the cover of a magazine just after the Black Album was released," recalls Greg. "On the cover was a quote that resonated with me to this day: 'METALLICA didn't go to number one, number one came to them.' I loved what that meant. Do it your way and never compromise your art. If you're great at what you do, people will come. I view that simple quote as one of the founding philosophical elements of Stone Brewing."

Aside from its intense drinkability, craft enthusiasts will note Enter Night's remarkable flavor and aroma which artfully combine the beauty of a traditional Northern German Pilsner with Arrogant Consortia's (a Stone Brewing imprint) modern overtones of aggression. The resulting genre-defying pilsner is hop forward with sound bitterness on the finish. It first appeared for the most worthy few in exclusive releases at METALLICA's shows this past fall. The beer will gain full U.S. distribution in the first quarter 2019, and its global domination will roll out this spring covering Europe, Australia, China and beyond.

Arrogant Consortia is a wholly owned imprint of Stone Brewing. Its often aggressive and always self-righteous lineup of beers includes Arrogant Bastard Ale and Bourbon Barrel-Aged Arrogant Bastard Ale, among others. The world-renowned brewery is well-known for waving the proud flag of independent craft brewing, while rallying against the bland, boring nature of industrialized, commoditized "fizzy yellow beer." Enter Night Pilsner is brewed to be enjoyed fresh and is best enjoyed with your friends… be it in bars, backyards, or tailgates… with your favorite music.

METALLICA previously ventured into the booze market with its whiskey, "Blackened", which which was made available in 2018 through the band's own Sweet Amber Distilling Co. 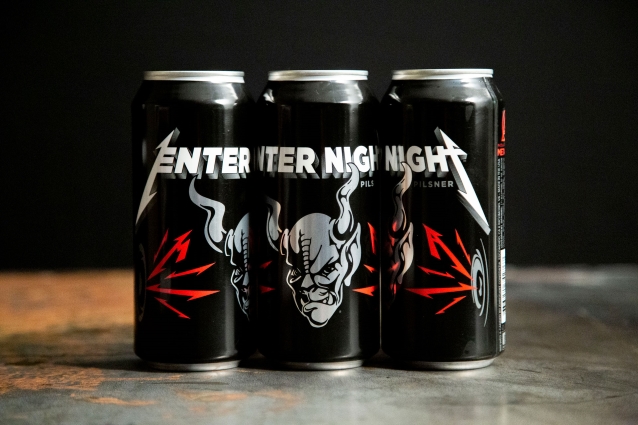