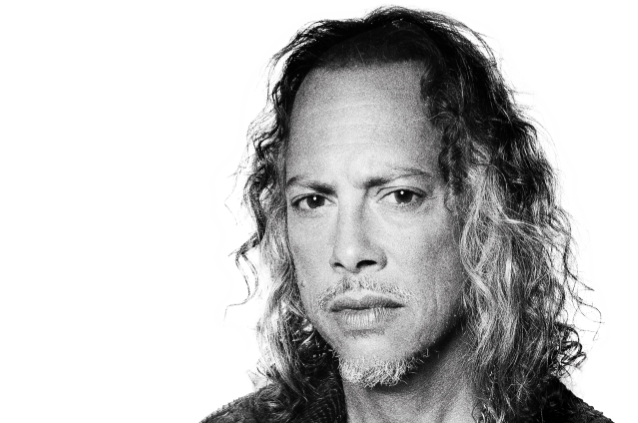 METALLICA guitarist Kirk Hammett has told Metal Hammer magazine that he is open to the idea of eventually releasing a solo album. "I have so much material sitting around that's obviously not METALLICA stuff, and that pile gets bigger and bigger. One of these days when it feels right…" he said. "I still feel I have so much to give METALLICA. When that feels more complete, maybe I'll think about doing that other stuff." As for what fans should expect from a Hammett LP, he said: "It would not look like a metal album at all. It'll be something so weird and far-ranging in styles, but cohesive at the same time. I wouldn't be surprised if all of us did some solo, independent, autonomous sort of thing. I think it's healthy, and if anything, when you come back to the band, you'd come back with more enthusiasm. It'd feel like going on a little camping trip, and it's always good to come back home to a nice warm bed!"

Hammett previously admitted to Rolling Stone in a 2008 interview that he contemplated going solo during the making of "St. Anger" while the bandmembers were struggling with their own issues, including James Hetfield's stay at rehab and various interpersonal conflicts. "Honestly, I was ready to start working on a solo album," he said. "I had a bunch of music I was sitting on. I was going to ask Lars [Ulrich, METALLICA drummer] to play drums on it."

Kirk told Rolling Stone that he played "a lot of jazz and blues" in his spare time. "I listen to Tal Farlow, Kenny Burrell, Elmore James and Buddy Guy. One of these days, I'll do a solo album that is very rounded, as far as styles of guitar. I was thinking once: What am I going to do when I'm 70 years old and I'm sitting on the porch with a guitar? Play 'Seek & Destroy'? [Laughs] I love riffing on UFO songs for half an hour. But then I'll lean over to the amp, switch to a clean channel and play some bossa nova or Robert Johnson."

METALLICA kicked off the 2018/2019 U.S. leg of the "WorldWired" arena tour on September 2 at the Kohl Center in Madison, Wisconsin. The band is continuing to tour in support of its latest album, "Hardwired… To Self-Destruct", which arrived in November 2016.