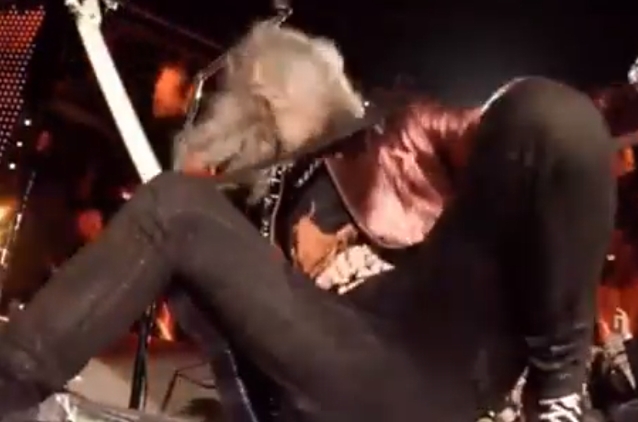 The incident happened during the guitar-solo section in the song "Moth Into Flame". Kirk was soloing away with his right foot on the guitar effects pedal board when he slipped and fell backwards, hitting the ground with his feet high above his head. After taking a second to laugh about the stage mishap, Hammett picked himself up and continued playing the track.

Immediately following the show, Hammett took to his Instagram to post video of his fall from two different angles and included the following caption: "Ummm- I slipped on my wet wah pedal. It rained so much I felt like I was playing guitar in the shower - #slipperywhenwet #wahwahwah #metallicafamily #Metinmilan @metallica"

Milan was the fourth gig of the spring/summer 2019 European leg of METALLICA's "Worldwired" tour, which kicked off on May 1 at the Estádio Do Restelo in Lisbon, Portugal.

"WorldWired" has played more than 130 shows across the world since its original 2016 kick-off.

Ummm- I slipped on my wet wah pedal. ? ? It rained so much I felt like I was playing guitar in the shower - #slipperywhenwet #wahwahwah #metallicafamily #Metinmilan @metallica