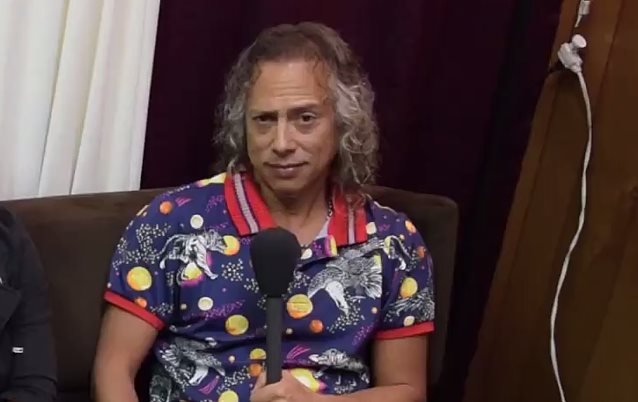 Baby Huey and Chasta of the 107.7 The Bone radio station conducted an interview with METALLICA guitarist Kirk Hammett before the band's August 12 concert at the Outside Lands festival at San Francisco's historic Golden Gate Park. You can now watch the chat below.

Speaking about the North American leg of METALLICA's "WorldWired" tour, which kicked off on May 10 in Baltimore, Maryland, Hammett said: "It's been in-fucking-credible. We're constantly being blown away by just… Everywhere we go… 'Cause it's been a while since we've been in America doing a tour like this, and we were a little bit apprehensive: 'Are people gonna show up with the same enthusiasm that they did last time?' But they certainly have, in droves, and then more so. I mean, people are showing their love more than ever for METALLICA, and it's great. And just as importantly, we seem to be reaching a lot of new fans who have never seen us before, and to us, that's fantastic."

Hammett, who does about a half hour of yoga before he goes onstage, stated about the feeling of perfoming in front of anywhere from forty to seventy thousand people every night: "Yoga helps me, puts me in the moment, helps me focus and keep my feet on the ground. But walking out onto that stage in front of all those people and feeling all their love and appreciation, 'cause you do feel it — all their excitement and adrenaline… Have you ever just walked into a room that's filled with friends and family, they've been expecting you, and they [go], 'All right! They're finally here'? It's the exact same sort of feeling. It's the same feeling that you get when you someone and they're genuinely happy to see you or glad to see you or seeing you finally after a long time. I mean, it's not that much different — it's just amplified a lot more. And then we hit those first few chords and then we're already into having a good time with everyone."

As previously reported, the final concert of the North American leg of "WorldWired" — which will take place Wednesday night, August 16 at Commonwealth Stadium in Edmonton, Alberta, Canada — will be streamed live on the webcast.livemetallica.com web site.

The first European leg of "WorldWired" kicks off on September 2 in Copenhagen, Denmark and stretches through November. After a break, the trek will pick up again on February 1, 2018 in Lisbon, Portugal, and continue through May, finishing up in Helsinki, Finland.