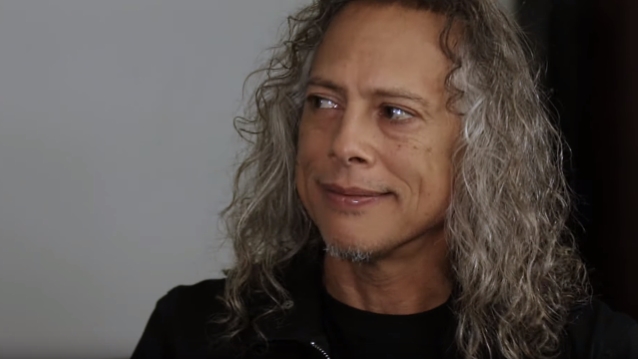 METALLICA guitarist Kirk Hammett recently spoke with the Toronto radio station Q107 about his exhibit of vintage horror film posters, "It’s Alive!: Classic Horror And Sci-Fi Art From The Kirk Hammett Collection", which opens at the city's Royal Ontario Museum today (July 13). The full conversation can be seen below. A few excerpts follow (as transcribed by BLABBERMOUTH.NET).

On the origins of his collection of horror memorabilia:

On the "boundaries" he imposes on his collection:

Kirk: "I like anything that is connected to those core group of movies or characters — Frankenstein, Dracula, The Mummy, Wolfman, Phantom Of The Opera, Creature From The Black Lagoon, The Hunchback Of Notre Dame. Those are the key characters, and from those key characters, all these other movies have come out, and all these books and movie posters and merchandise and toys and whatnot."

Kirk: "The collection of things that are going to the museum is my core collection — my 100 best pieces. It's very representative of the horror genre in general, from the turn of last century up until modern times. You can see the development of horror movie posters and all the different trends that they went through. For instance, movie posters from the '30s are very vivid and have very lush details. When I look at them, I get a sense of romance and whatnot, and that makes sense because back in the '30s, the most successful type of movie were romance movies, relationship movies. To reel in that audience, those ticket buyers, the studios would design the horror movie posters so that they looked like romance movies. It's a very, very subtle thing. It's a very stylized look... The '50s were heavy on women in either bathing suits or lingerie being chased by monsters. These creatures and aliens were so fortunate to be able to catch these women in such scantily-clad attire."

On the challenge of tracking down vintage horror posters:

Kirk: "Over the first World War and in the second World War, there was these things called paper drives, which were basically big recycling efforts to get all the paper that people weren't using and haul it off to be recycled. As a result, there's very few examples of these posters that survived, and a lot of times, they've survived because of flukes. A lot of them have been found in between walls, [where they were] used as insulation. A major piece was found three years ago in Canada. It was found in a boarded-up projection room that no one had opened for, like, the last 40 or 50 years. As they came into the room, right on the wall was a 'Frankenstein' three sheet [poster]. Up until that time, no one had ever seen one or knew one existed... It's like hunting for gold. There's a lot of pieces out there that I would love to have that have not just been found at all, like a 'Bride Of Frankenstein' three sheet or a 'Dracula' three sheet. Who knows? When I first started 30 years ago, no one knew that there was a 'Frankenstein' three sheet out there or a 'Mummy' three sheet. I found both. Those two are the only known copies in the world. I don't know what's coming around the corner. It's just one of those unpredictable things, and that's also part of the appeal, I think. If you want to become a movie poster collector, there's two ways to do it — you go online and buy from dealers, or you hit the road and you start hitting up movie theaters and antique stores and flea markets. You can find stuff out there. A lot of people who are doing that, probably as we speak right now, they're probably driving to some place because they heard of an old movie theater that's been boarded-up for the last 20 years, but someone still has the key. That's how it all works. You never know — there could be gold in there."

On his favorite piece in his collection:

Kirk: "Probably the 'Mummy' three sheet. I love that image. It's on my guitar. When I look at it, I just get lost in the colors of it, the composition, the lushness of it. I just love it. I get lost in this stuff. My mind just dives in totally, and I'm just somewhere else. It's an amazing effect that this stuff has on me."