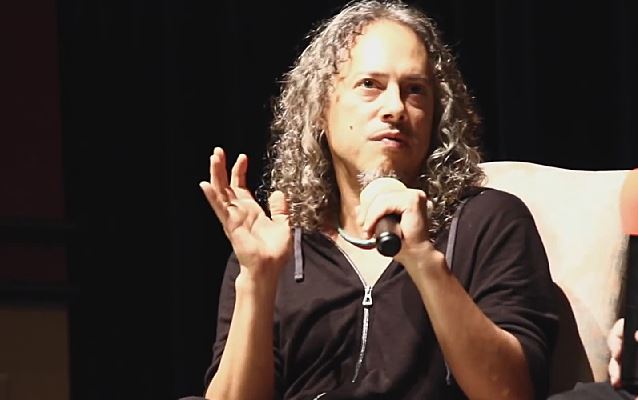 METALLICA served as Artists In Residence at the 37th annual Mill Valley Film Festival, which is taking place between October 2 and October 12 in the northern California city. Each of the band's four members hosted a screening of a film that they personally selected for the event.

On October 6, bassist Robert Trujillo hosted a screening of "Jaco", the documentary he helped produce about late bassist Jaco Pastorius.

Drummer Lars Ulrich took over on October 7 for a screening of "Whiplash", a new indie film about an aspiring drummer and his ruthless teacher that won multiple awards at Sundance this year. Ulrich also interviewed director and screenwriter Damien Chazelle after the film.

METALLICA frontman James Hetfield presented an October 8 screening of the classic spaghetti western "The Good, The Bad And The Ugly". The film's main theme as served as the opening music for METALLICA's live show for decades.

Speaking about his love of all things horror and the parallels between horror movies and heavy metal, Hammett said during his intro question-and-answer session (see video below): "Heavy metal and horror movies come from the same sources, they come from the same seeds, they have a lot of the same imagery and subject matter and whatnot. And for myself, part of the appeal of horror movies is coming in contact with my own mortality but not having to pay the price. Or, like, reliving a death or something without having to go through the actual experience. Bringing yourself to a point where you're maybe in a state of fear, but for your own pleasure."

He continued: "Watching a good horror movie makes my adrenaline go. And for me, it's great, it's the ultimate. I mean, some people like action films. Me, [I like] horror movies."