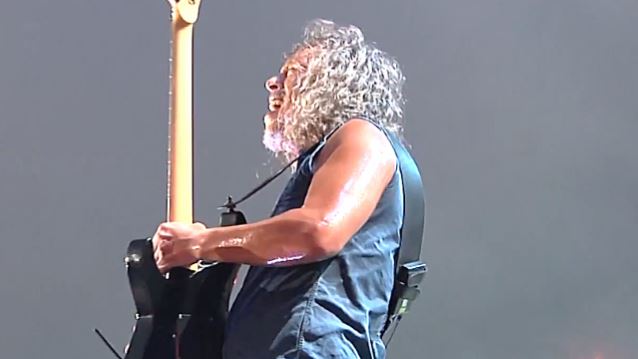 METALLICA guitarist Kirk Hammett was interviewed for the latest episode of "The MetalSucks Podcast". You can now listen to the chat using the widget below. A couple of excerpts follow (transcribed by BLABBERMOUTH.NET).

On his renewed passion for playing guitar:

"I've been telling this for the last eight or nine months… I seem to have found a way to reconnect with my guitar in a way that I have not reconnected with it in decades. And it's really, really interesting for me, because, all of a sudden, I'm finding myself playing different stuff I've never played before and approaching things in a different way that I've never approached things before. And it's really, really strange, because I didn't expect this. I just thought, if I just keep on playing my instrument, life goes on. But somehow or another, I managed to reconnect with my instrument and feel inspired all over again. It's actually weird to me, 'cause, like I said, I didn't expect this to happen, but it's happening, and I'm very, very grateful for it."

On how he measures success:

"We always kind of viewed success in musical terms, in creative terms and accomplishing our own goals that we wanted to accomplish. And that never really equated to numbers or dollar signs. It mostly equated to good music and good, emotional performances. For me, one of the very first successes that we ever had was being able to go to Europe when 'Kill 'Em All' first came out. I mean, that, for us, was the most amazing thing. 'We made an album. Oh, no! You're kidding! We actually have an opportunity to go to Europe and play?' I mean, that was an amazing success. And another amazing success, in my opinion, was making 'Ride The Lightning'. A lot of times you get an opportunity to make an album and it's not really guaranteed that you'll be able to make a second album. But we were able to make a second album, and we were successful on a bunch of different levels. I mean, we actually made an album that we thought was pretty fucking great, and we actually recorded it in Europe and were able to go on tour and tour that album in Europe and in America. So the successes for us weren't really measured in a sort of like a business way; our successes were always measured in a more so creative way, a musical way. And to this day, yeah, the managers say, 'Oh, this is a success because you sold 'X' amount of tickets or sold 'X' amount of numbers,' but, really the real successes that really mean something are the musical successes, the creative successes and the successes that come along with a lot of hard work and a lot of real goal-orientated striving to hit that mark."

"Bro, I just try and be the best musician I possibly can, the best guitar player I can, the best bandmember I can possibly be. And stuff like polls and whatnot, all that stuff, it doesn't really make that much difference to me. It's more a popularity contest than anything to me — or it seems like it's a popularity contest. And, you know, ever since I was a kid, I've always been really good at losing popularity contests. And so to all of a sudden start winning these popularity contests as an adult, I kind of know better… You have to understand, man, I am like the classic case of just, like, a shy, nerdy kid who just wanted to play guitar and just found that he could do something really well. And I just took it."