The August 2014 issue of Guitar World magazine contains an interview with METALLICA guitarist Kirk Hammett about the 30th anniversary of the band's sophomore album, "Ride The Lightning". Asked how his view of the "Ride The Lightning" era has changed in the last three decades, Hammett said: "It's interesting. Just this morning I was telling my kids what I was going to do today. I'm like, 'These people are taking a picture of me in an electric chair!' They're both young, so, of course, they said, 'Why?' I explained it's because we have a song called 'Ride The Lightning' and that's another way of saying, 'You're getting electrocuted in an electric chair!' Then I had to play them the song and sing them the lyrics. They're sitting there looking at me, like, Wow. [laughs] So I'm sitting with them, listening to that 'Ride The Lightning' guitar solo, and I was like, I have absolutely no recollection of putting all those harmonies on there! [laughs]

"When we were putting that song together, we had the intro riff, the verse, the chorus, and a part of the instrumental bridge. When the whole thing slows down and there's that solo section, I remember I pretty much played that solo as it is off the bat.

"When I recorded that in 1984, I was 21 years old. That's crazy. In 1984, a guitar solo like that was something. If you put it into context of what was going on back then, it was very modern sounding. Of course, if you put it into today's context, it sounds like classic rock. [laughs] It's not like today's norm, with sweeping arpeggios and 32nd notes everywhere. I also have to say that when I listened to it this morning, I realized that the actual sound of the album is still good. After all these fucking years, it still holds up sonically."

Hammett also spoke about how METALLICA's late bassist Cliff Burton was an important force in pushing the band in a new progressive direction on "Ride The Lightning".

"Cliff was a total anomaly," Kirk said. "To this day, I'm still trying to figure out everything I experienced with him. He was a bass player and played like a bassist. But, fucking hell, a lot of guitar sounds came out of it. He wrote a lot of guitar-centric runs. He always carried around a small acoustic guitar that was downtuned. I remember one time I picked it up and was like, 'What is this thing even tuned to, like C?' He explained that he liked it like that because he could really bend the strings. He would always come up with harmonies on that acoustic guitar. I would be sitting there playing my guitar and he'd pick up his bass and immediately start playing a harmony part. And he would also sing harmonies. I remember THE EAGLES would come on the radio and he would sing all the harmony parts, never the root."

METALLICA drummer Lars Ulrich previously stated about "Ride The Lightning": "I think it showed our fans and so on that we were not the kind of band that was gonna be in the pile of predictable bands and that hopefully we set the tone for the rest of the '80s."

A self-taught drummer, Ulrich revaled that after the release of METALLICA's first album, 1983's "Kill 'Em All", he had to take some lessons to get the basics down. "Before releasing 'Ride The Lightning', I decided to take drum lessons for about six months because there were some basic rudiments that I didn't even know," he said.

The August 2014 issue of Guitar World can be purchased at this location. 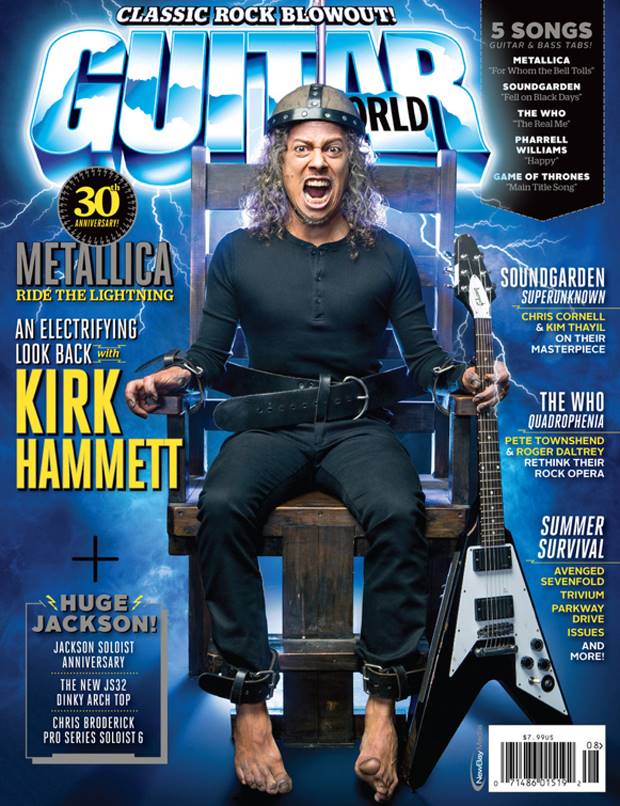